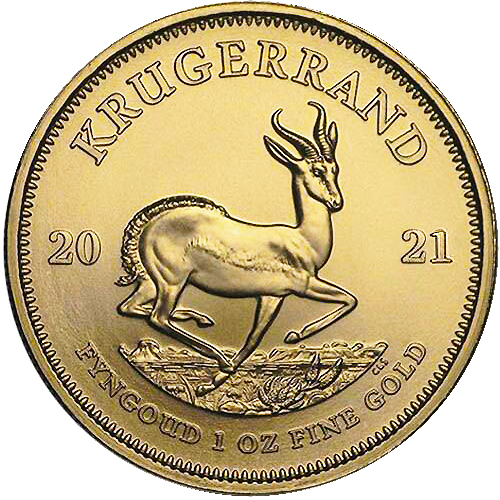 When the Gold Krugerrand was introduced in 1967, South Africa was already known as one of the gold mining capitals of the world. The newly independent nation of the Republic of South Africa was looking to use its vast gold reserves to generate income for the nation and promote the private ownership of gold bullion coins.

The result was the introduction of the Gold Krugerrand. The series was developed with a name combining the last name of the famed President of the South African Republic of the 19th century, Paul Kruger, and the new national denomination of the Rand. While Gold Krugerrands have legal tender status, none of the gold coins have a marked denomination in Rands.

The reverse field of the 2021 Gold South African Krugerrands bears an image of the Springbok antelope. This beloved antelope species occupies the southern plains of the African continent. The Springbok has also appeared on previous coins from South Africa over more than a century of time.

These 2021 1 oz Gold South African Krugerrands are available to you individually or in multiples. Individual coins come in protective plastic flips. Multiples are housed in mint packaging that includes tubes for multiples of 10 coins. All coins are in Brilliant Uncirculated condition.

Silver.com customer service is available to assist you with questions at 888-989-7223. You can also chat with us live online or simply send us an email with your inquiries.