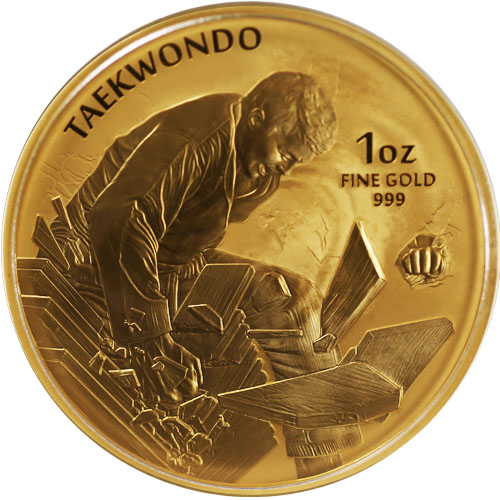 Like any nation in the world, KOMSCO produces gold bullion pieces for the Republic of Korea that reflect the people, places, and culture of South Korea. Among its long-running collections are the Chiwoo Cheonwang and South Korean Tiger Series. One of its newer series to celebrate Korean culture is the Taekwondo Series. Now, 2021 1 oz Gold South Korean Taekwondo Medals are available to you for purchase online from Silver.com.

Taekwondo is a form of specialized Korean martial arts. It is rooted in punching and kicking techniques with a particular emphasis on head-height kicks, jumping kicks involving spinning, and fast kicking techniques. Taekwondo was first developed in 1945 following the end of World War II.

The art of taekwondo arose as a result of the long Japanese Occupation of the Korean Peninsula in the Interwar Period and throughout World War II. The techniques developed in taekwondo came from a mixture of Japanese and Chinese martial arts, but also have local roots in traditional, indigenous Korean martial arts such as Taekkyon, Subak, and Gwonbeop.

The obverse 2021 1 oz Gold South Korean Taekwondo Medals comes with a depiction of a figure performing martial arts. In this design, the figure is breaking boards with a closed fist. This taekwondo specialist is not breaking just one board, but several. Taekwondo is governed in Korea by the Korea Taekwondo Association, the oldest governing body in Korea that was formed in 1959.

On the reverse side of 2021 Gold South Korean Taekwondo Medals is an image of the Taegeuk, the official emblem of the Republic of Korea. This design features a yin-yang figure that has swirling lines around it. The Taekgeuk is the official symbol of the government of Korea and features on the national flag.

Silver.com customer service is available to you at 888-989-7223. Our team is also available to assist you online through our live chat and via our email address.