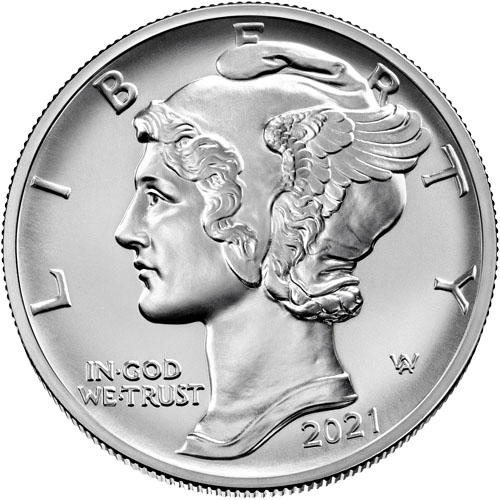 In keeping with the designs on the Silver Eagle and Gold Eagle bullion coins, the US Mint reached back into its history of circulation coinage for a design to grace the obverse of the coins. Adolph A. Weinman’s 1916 design from the US Dime was chosen to feature on the new Palladium Eagles.

Winged Liberty is found on the obverse side of 2021 1 oz Palladium Eagles. This artwork was created in 1916 by Weinman for the US Mint. It was one of two designs created that year by Weinman for the US Mint to use in reinvigorating national coinage. The other design was the Walking Liberty design used on the Half Dollar and now featured on the obverse of the Silver Eagle bullion coin. This design of Winged Liberty featured in left-profile relief graced the US Dime from 1916 to 1945.

An American bald eagle is featured in the reverse field of 2021 Palladium American Eagles. This depiction of the bald eagle originally graced the American Institute of Architects medal and was designed in 1907. It shows a powerful bald eagle perched on the edge of a cliff as it clutches a small sapling.