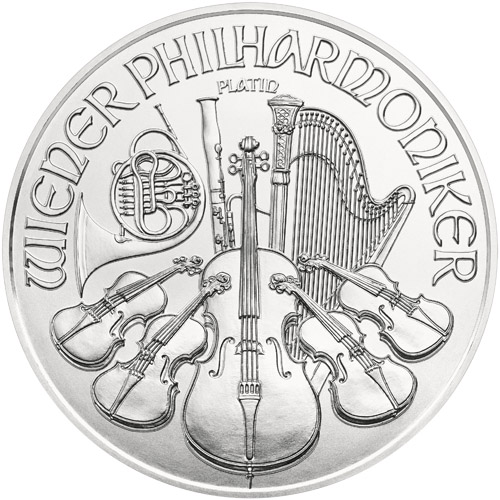 All of the 2021 1 oz Platinum Austrian Philharmonics available in this product listing come in either individual packaging or multiples packaging. Individual coins come in protective plastic flips, while multiples of 10 coins come in mint tubes. All of the coins are available to you for purchase in Brilliant Uncirculated condition.

The Musikverein’s Great Pipe Organ is featured in the obverse design element of 2021 Platinum Austrian Philharmonics. The Musikverein is located in the Innere Stadt neighborhood of Vienna, the national capital of Austria. The concert hall is run by the Society of Friends of Music in Vienna. The land on which the hall was built was gifted to the society in 1863 by Emperor Franz Joseph I, monarch of the Austro-Hungarian Empire. The hall was completed in 1870, its first pipe organ installed in 1872, and this current pipe organ installed in 1907.

In the reverse design of 2021 1 oz Platinum Austrian Philharmonics, the Austrian Mint features a collection of musical instruments. These instruments reflect those commonly used by members of the orchestra and include a cello, four violins, a bassoon, a harp, and a Vienna horn.

Please contact Silver.com if you have any questions. Our team is available to you at 888-989-7223, online through our live chat, and using our email address.