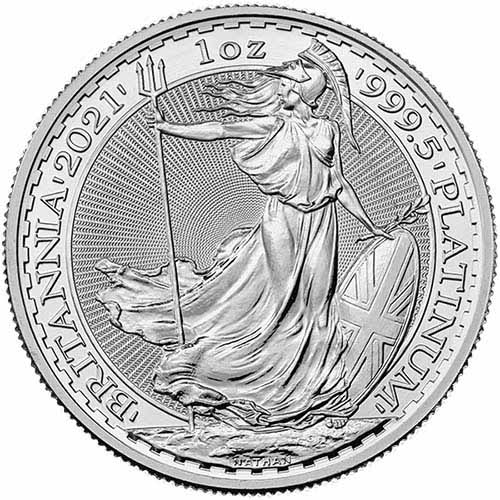 Introduced in 2018, the Platinum British Britannia is a unique platinum coin series among those available globally at the moment. While historic platinum bullion coin collections like the American Eagle and Canadian Maple Leaf once featured fractional-ounce coins, the Platinum Britannia is the only major bullion series currently available that offers a fractional-ounce coin alongside a 1 oz platinum coin.

Queen Elizabeth II features on the obverse face of 2021 1 oz Platinum British Britannias. This bust of the Queen is the fifth-generation portrait to feature on British coins during her reign. It was created in July 2015 by Jody Clark and depicts the Queen at the age of 89 wearing the George IV State Diadem Crown.

Britannia is depicted in a modern design of the female personification on the reverse field of 2021 Platinum British Britannias. Philip Nathan created this modern vision of Britannia that shows her standing along the coast of the British Isles. She grasps a trident in her right hand, granting her control over the seas. A shield resting beneath her right-hand guards the nation and features the Union Jack on its surface.

These 2021 1 oz Platinum British Britannias are available to you for purchase today in Brilliant Uncirculated condition. These coins are packaged individually inside of protective flips. Multiples will ship in tubes of 5 to 10 coins, while boxes are available for multiples of 100 coins. The box features 10 tubes of 10 coins each.

Silver.com customer service is available to assist you with any questions at 888-989-7223. We are also available online through our live chat and email address features.