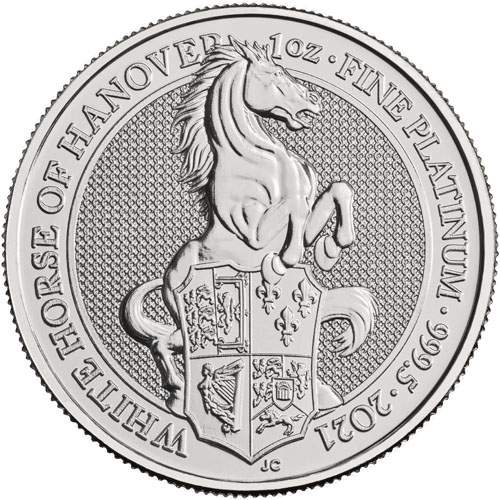 The ten heraldic beasts featured in the Queen’s Beast Series from the Royal Mint of England span more than just generations of monarchs, but nearly 1,000 years of British history. From the adoption of the Three Lions and the Lion of England in 1198 during the reign of King Richard I to the more recently added White Horse of Hanover in 1714, the 10 heraldic beasts capture the splendor of the history of the British Crown. Right now, 2021 1 oz Platinum British Queen’s Beast White Horse Coins are available to purchase online at Silver.com.

Each 2021 1 oz Platinum British Queen’s Beast White Horse Coin available to you here today comes packaged individually or in bulk. Coins ordered in multiples of 1 to 9 will ship to you inside of plastic flips. Multiples of 10 platinum coins are packaged in acrylic tubes, while multiples of 100 ship inside of boxes. The box holds a total of 10 individual tubes with 10 coins per tube. All coins are in Brilliant Uncirculated condition.

On the obverse of 2021 1 oz Platinum British Queen’s Beast White Horse Coins is an effigy of Queen Elizabeth II. Her Majesty is shown here in right-profile relief and wears the George IV State Diadem, a crown from the Crown Jewels commissioned during the reign of the penultimate Hanoverian monarch, King George IV.

The reverse side of 2021 Platinum Queen’s Beast White Horse Coins includes a depiction of the White Horse of Hanover supporting the Royal Arms of King George I. While the Hanoverian monarchs changed the Royal Arms several times during their reign, most notably twice during the reign of King George III in the 19th century, the arms of King George I remained steady. His Royal Arms included a quartered shield with the Lion of England and Lion of Scotland in the first quadrant, French lilies in the second quadrant, the Harp of Ireland in the third quadrant, and the arms of the House of Hanover in the fourth.