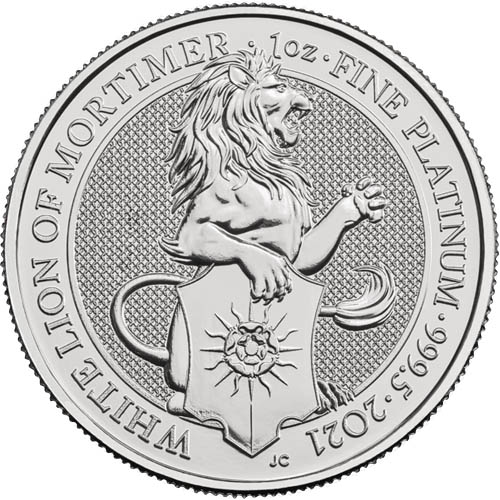 The Queen’s Beast Series of bullion coins from the Royal Mint of England has been available since 2016. The collection catalogs the 10 most important heraldic beasts in English history dating from the first official Royal Arms of England in 1198 as carried by King Richard I, better known as Richard the Lionheart. From the first monarch of the House of York, the White Lion of Mortimer features eighth in the Queen’s Beast Series. Now, 2021 1 oz Platinum British Queen’s Beast White Lion Coins are available to you for purchase online at Silver.com.

The obverse side of 2021 1 oz Platinum British Queen’s Beast White Lions includes a depiction of Queen Elizabeth II. Her Majesty is featured in right-profile relief wearing the George IV State Diadem Crown. The design is the fifth-generation bust of the Queen during her reign and was designed in 2015 by Jody Clark.

On the reverse face of 2021 Platinum British Queen’s Beast White Lions is an image of the White Lion of Mortimer supporting the shield and crest of the House of York. The Yorkist emblem uses a single white rose surrounded by a golden sun, a design known as the “white rose en Soleil.”

These 2021 1 oz Platinum British Queen’s Beast White Lions are available to purchase with individual plastic flips. Multiples come in mint tubes of 10 coins or boxes of 100 coins. All of the coins are in Brilliant Uncirculated condition.

Silver.com customer service is available to assist you at 888-989-7223 with questions about platinum coins. Alternatively, you can reach us on the web through our live chat and email address features.