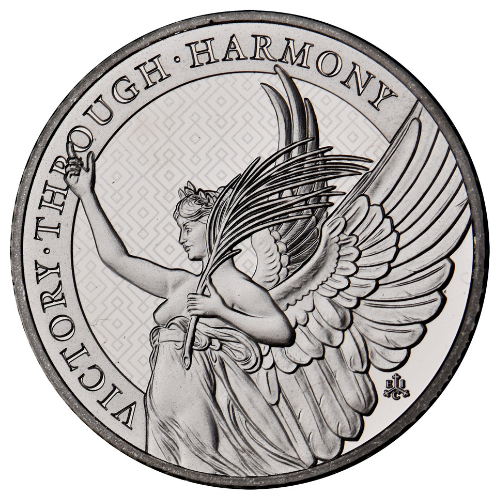 The Queen’s Virtues Series from St. Helena and the East India Company is a six-coin release celebrating the female allegories present in the Victoria Memorial in London. Erected in honor of one of Britain’s greatest monarchs, the Victoria Memorial includes statues of female allegories that many associated with the crown, in general, and Queen Victoria, in particular. Today, 2021 1 oz Platinum St. Helena Queen’s Virtues Victory Coins are available to you online at Silver.com.

The Queen’s Virtues Series is a six-coin release planned to celebrate the six virtues associated with the monarchy in England. The concept of these virtues arose during the culture-altering reign of Queen Victoria. The virtues include Victory, Truth, Charity, Justice, Courage, and Constancy. Victory is one of the virtues most closely associated with the monarchy as the monarch of England has the power to both officially declare war and accept peace.

All of the 2021 1 oz Platinum St. Helena Queen’s Virtues Victory Coins are available to you with protective plastic capsules. The platinum coins in this series are available to you in Brilliant Uncirculated condition and complement the existing 1 oz silver and 1 oz gold bullion coins available in the collection. You can also purchase the coins in sheets of 10 or boxes of 50. The box contains five sheets of 10 coins each.

On the obverse of 2021 Platinum St. Helena Queen’s Virtues Victory Coins is an effigy of Queen Elizabeth II. The longest-reigning monarch in British history and great-granddaughter to Queen Victoria, it is the role of Queen Elizabeth II to carry on the virtues of her great-grandmother and the monarchy into the 21st century. This effigy is the third-generation portrait of the Queen to feature on British coins and was created for the Royal Mint in 1985.

The reverse side of the 2021 Platinum Queen’s Virtues Victory Coins depicts the primary statue from the Victoria Memorial. Here, Victory stands holding out her right hand as her left hand holds a palm branch, the symbol of peace and victory. The Victoria Memorial in London features Victory as the prominent statue, but she is also flanked by figures representing the other five Queen’s Virtues.

Please feel free to reach out to Silver.com with any questions. You can reach out to our team on the phone at 888-989-7223, on the web using our live chat, and via our email address.