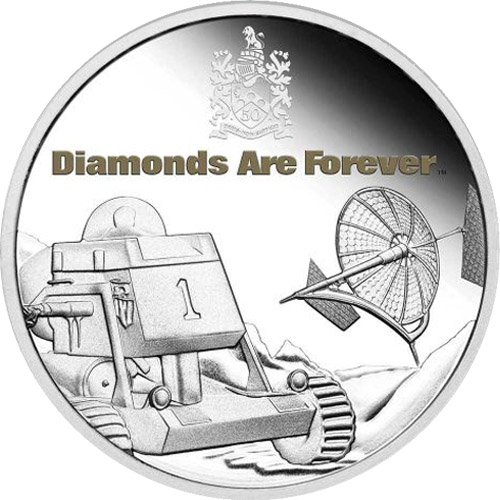 The first James Bond feature films from Eon Productions debuted in the 1960s. Over the course of the first five films, only one man portrayed the famed British secret agent: Sean Connery. After Connery opted not to reprise the role in 1969’s On Her Majesty’s Service, George Lazenby stepped into the role. However, for the release of Diamonds are Forever, the studio wanted Connery back and was willing to pay any price to get him. Connery would return to the role for a then-record sum of $1.25 million and complete his sixth appearance in an Eon film as Bond.

All of the 2021 1 oz Proof Colorized Silver James Bond Diamonds are Forever 50th Anniversary Coins available here come with presentation packaging. The coins are housed in black Perth Mint cases with a clear lid. The coin and its case ship inside a themed box from Perth Mint with a Certificate of Authenticity included. These proof specimens have frosted designs and mirrored fields with limited colorization on the reverse of the coins.

On the obverse of 2021 Proof Colorized Silver James Bond Diamonds are Forever 50th Anniversary Coins is Queen Elizabeth II. Her Majesty is shown here in right-profile relief with the Girls of Great Britain and Ireland Tiara. The design was created in 1998 by Ian Rank-Broadley for the Royal Mint.

The reverse side of the 2021 1 oz Proof Colorized James Bond Diamonds are Forever 50th Anniversary Coin features a depiction of Bond’s famous escape during the film. After infiltrating a research lab and having his cover blown, Bond makes his escape using a moon buggy. This side of the coin features the limited colorization on the title of the feature film.

Please contact Silver.com with any questions about these 1 oz silver coins. You can call us at 888-989-7223, chat with us live online, or email us directly.