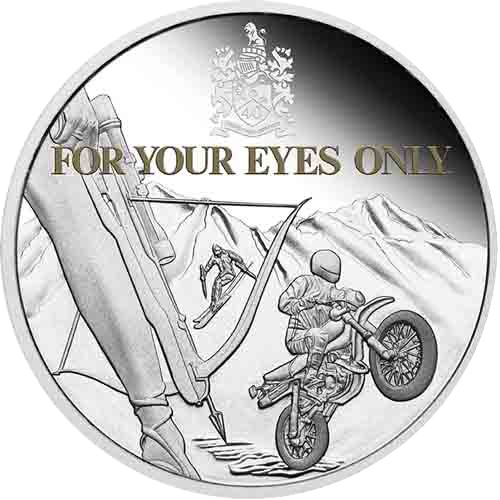 With designs inspired by the original 1981 movie poster, the new For Your Eyes Only 40th Anniversary release of silver for sale from Perth Mint offers a beautiful design for fans of James Bond. The movie was a blockbuster within the James Bond franchise and marked the fifth appearance of Roger Moore as Bond. Right now, 2021 1 oz Proof Colorized Silver James Bond For Your Eyes Only 40th Anniversary Coins are available to purchase online at Silver.com.

Each 2021 1 oz Proof Colorized Silver James Bond For Your Eyes Only 40th Anniversary Coin is available to you with proof visuals. The coins are struck with frosted designs overlaying mirrored fields. Each one is housed in a clear, black display from Perth Mint with a themed shipper and a Certificate of Authenticity. These coins all have gold colorization on the film name featured on the reverse field.

The 1981 release of For Your Eyes Only was the 12th James Bond feature film from Eon Productions. The film marked the fifth of seven consecutive appearances of Roger Moore as the titular character in the franchise, and it also marked the first film directed by John Glen. Mr. Glen would go on to direct the next four films in the franchise following this 1981 film, taking him through the end of Roger Moore’s status as James Bond and into the brief period of time that Timothy Dalton held the title role.

The obverse side of 2021 Proof Colorized Silver James Bond For Your Eyes Only 40th Anniversary Coins comes with a portrait of Queen Elizabeth II. Her Majesty is shown here in right-profile relief wearing the Girls of Great Britain and Ireland Tiara.

On the reverse face of 2021 1 oz Proof Colorized James Bond For Your Eyes Only 40th Anniversary Coins is a replica of one of the most notable scenes in the film. Assigned to recover an encryption device known as the ATAC that was lost by the Royal Navy, Bond races down a mountainside on skis as he is chased by assassins on motorbikes. The image of Bond skiing, a motorbike racing down the hill, and a woman’s leg with a crossbow was inspired by the poster for the feature film.

If you have any questions, Silver.com is happy to help. Please call us at 888-989-7223. You can also chat with us live online or simply send us an email with your inquiries.