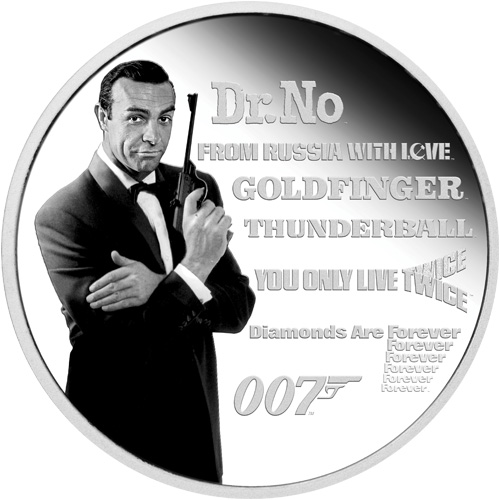 When Ian Fleming’s James Bond character came to life on the big screen in 1962, readers had been following the exploits of the British Secret Service agent for nearly a decade. The first man to step into those shoes and bring the Bond character to life was Sean Connery. The legendary actor last portrayed Bond in 1983, but for millions of Bond fans around the world, he remains the symbol of the perfect Bond man. Today, 2021 1 oz Proof Colorized Silver James Bond Legacy Sean Connery Coins are available to you online at Silver.com.

Sean Connery remains the quintessential vision of James Bond in the minds of millions who have seen the films and subsequently read the books. Sir Sean Connery depicted Bond in a manner that no other actor in the franchise’s history has accomplished. His achievements include being the first Bond ever, debuting in Dr. No in 1962. He was not only the first James Bond, he portrayed Bond in the first five films, six of the first seven films, and seven films in all. He was the only man to portray Bond across three decades: 1960s, 1970s, and 1980s. He was also the only man to play Bond in both Eon Productions official films and one of the two non-Eon Productions films.

All of the 2021 1 oz Proof Colorized Silver James Bond Legacy Sean Connery Coins listed here come with a protective plastic capsule. The coin and its capsule are housed inside of a black presentation box that includes a numbered Certificate of Authenticity and the iconic “007” logo on the lid of the box. The coins listed here are colorized proofs, with frosted designs and mirrored fields, as well as black-and-white colorization on the portrait of Sir Sean Connery.

Queen Elizabeth II features on the obverse side of 2021 Proof Colorized Silver James Bond Legacy Sean Connery Coins. This is the fourth-generation effigy of Queen Elizabeth II from the Royal Mint of England and the fifth design used on many coins of the Commonwealth in the Pacific Ocean region. The Queen is shown in this design wearing the Girls of Great Britain and Ireland Tiara.

Sir Sean Connery strikes a confident pose in the reverse field of 2021 1 oz Proof Colorized James Bond Legacy Sean Connery Coins. The iconic Scottish actor portrayed Bond five times in the 1960s, once in the 1970s, and one final time in the 1980s. Here he is shown standing with his gun at hand and the names of his Eon Productions films inscribed on the field.

Please contact Silver.com if you have any questions about silver coins for sale. Our team is available at 888-989-7223, online using our live chat, and via our email address.