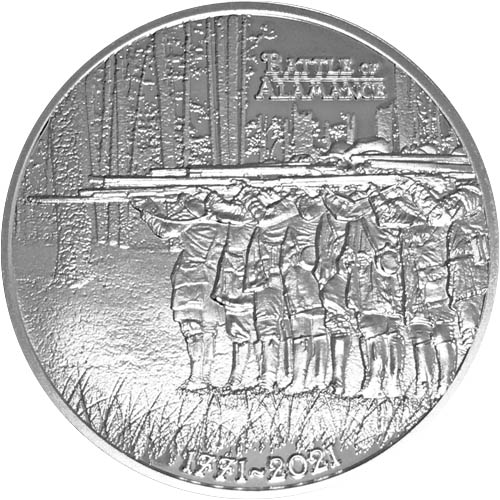 The Battle of Alamance occurred on May 16, 1771, out near the Great Alamance Creek. The western counties of North Carolina had been rebellious toward the Royal Governor of North Carolina since 1765, pushing back against corrupt local officials and those who were tools of the King of England.

All 2021 1 oz Proof Silver American Revolution Battle of Alamance Coins are packaged inside of protective acrylic capsules. The coins in this particular release are proof specimens with frosted design elements above mirrored fields. Each coin comes with a limited mintage and a Certificate of Authenticity from the Native American Mint. The COA features the first American flag with the logo of the Native American Mint. Though the coins have a face value, the One Dollar value is not legal US tender.

On the obverse of 2020 Proof Silver American Revolution Battle of Alamance Coins is a depiction of militia members lined up with muskets lowered and ready to fire. While the colonial forces under Royal Governor William Tryon fought with traditional warfare tactics of the day, the Regulators of western North Carolina fought in a style more akin to the indigenous tribes of America. The Regulators attacked from the woods, hiding behind trees while reloading.

The reverse side of the 2021 1 oz Proof Silver Battle of Alamance Coins comes with a Liberty Tree design. An elm tree, the Liberty Tree was believed to have sprouted in what is now Boston Common in 1646 and was a popular gathering place for American Colonists as resistance to British rule began to grow.

Please feel free to contact Silver.com with questions about silver for sale. Our customer service team is available at 888-989-7223, online using our live chat, and via our email address.