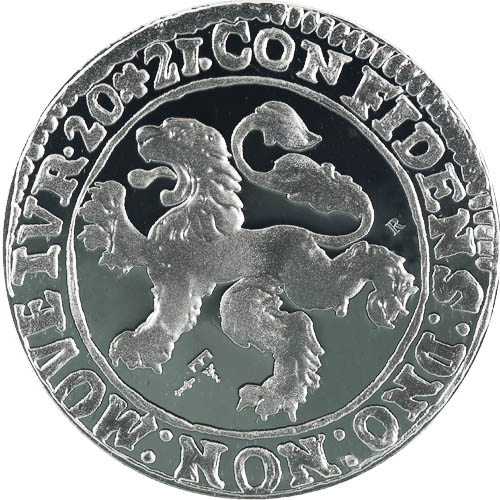 The Royal Dutch Mint can trace its roots back to the founding of the Utrecht Mint in 1567. Today, it remains the official sovereign mint of the Kingdom of the Netherlands. One of its most prominent silver bullion coin collections is the Proof Silver Lion Dollar Series, a collection honoring the historic versions of the Silver Lion Dollars issued by the provinces of the Netherlands. Today, 2021 1 oz Proof Silver Netherlands Lion Dollars are available to you online at Silver.com.

The Royal Dutch Mint was first formed in 1567 when the Utrecht Mint was founded as a provincial mint. At this point in Dutch history, coinage was produced at a variety of provincial mints and accepted across the borders of the provinces in the empire. In 1575, the first Silver Dutch Lion Dollars were issued by Dutch mints.

Originally, Silver Dutch Lion Dollars were struck with varying images of the Dutch Lion on the obverse side. Each province issued the coins on their own at provincial mints using varying designs. For example, the series has already featured the Dutch Lion Dollar designs from Utrecht, Zeeland, Gelderland, and Holland. In this fifth release, it is time for Overijssel to step into the spotlight.

On the obverse of 2021 1 oz Proof Silver Netherlands Lion Dollars is a depiction of the rampant lion of Overijssel. This depiction shows a rampant lion in left-profile relief and comes with shaggy fur throughout the body of the lion. The original Dutch Lion Dollars were issued by provincial mints for use in international trade.

The reverse side of the 2021 Proof Silver Netherlands Lion Dollars features the image of a Dutch knight. This 16th-century knight is shown in left-profile relief as he looks back over his left shoulder. Below the knight, you will find the shield from the coat of arms from the Netherlands.

These 2021 1 oz Proof Silver Netherlands Lion Dollars are available to you with proof visuals and are housed in display boxes with an included Royal Dutch Mint shipper. The coins also come with a Certificate of Authenticity.

Silver.com customer service is available to you at 888-989-7223. Our team is also available online using our live chat and email address features.