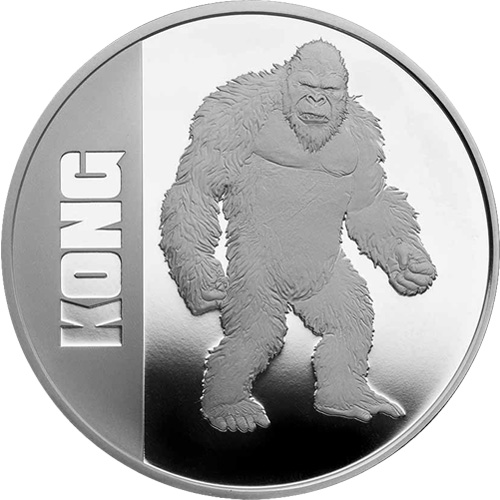 The 2021 smash-hit movie phenomenon Godzilla vs. Kong thrilled fans across the globe. Not only did it offer truly sensational fight sequences between the two legendary movie monsters, but it served up an amazing story with indelible characters as well. This is a movie you’ll want to revisit over and over. In recognition of its importance in popular culture, a stunning lineup of officially licensed coins has been issued for fans to further express their love of this instant classic motion picture. Now, 2021 1 oz Proof Silver Niue Godzilla vs Kong – Kong Coins are available to you for purchase online at Silver.com.

Each of these 2021 1 oz Silver Niue Godzilla vs Kong – Kong Coins is officially recognized as a proof specimen. This means the coins were struck with special dies multiple times to achieve a mirror-like quality with frosted devices. Each coin is protected inside a capsule and will arrive in a round gift tin with a Certificate of Authenticity from the mint.

Kong made his motion picture debut in 1933 with the black & white classic titled King Kong. Later the giant ape appeared in two Japanese Toho productions in the 1960s before getting another Hollywood big-screen treatment in 1976. Filmmaker Peter Jackson offered his own take on the Eighth Wonder of the World in the 2005 epic King Kong. Finally, the current iteration of Kong is found in the MonsterVerse series, which has depicted the beast in both Kong: Skull Island from 2017 and Godzilla vs. Kong, released in 2021.

The obverse of 2021 1 oz Proof Niue Godzilla vs Kong – Kong Coins features a silhouetted image of King Kong and Godzilla facing off. Beneath this design, there is the Niue coat of arms, and inscribed along the rim are the coin’s denomination, weight, purity, and metal type. Also shown is the official licensing information from Legendary Entertainment and TOHO.

On the reverse field of 2021 1 oz Proof Silver Niue Godzilla vs Kong Coins is a depiction of King Kong. Kong is revealed in an upright position, which is typically how he is seen in the films. With clenched fists and a menacing expression, Kong looks more than ready to take on his archrival, Godzilla. Also shown is an inscription of the word Kong in vertical lettering.

Silver.com customer service is here to assist you at 888-989-7223 with questions about silver for sale. We are also available online using our live chat and email address features.