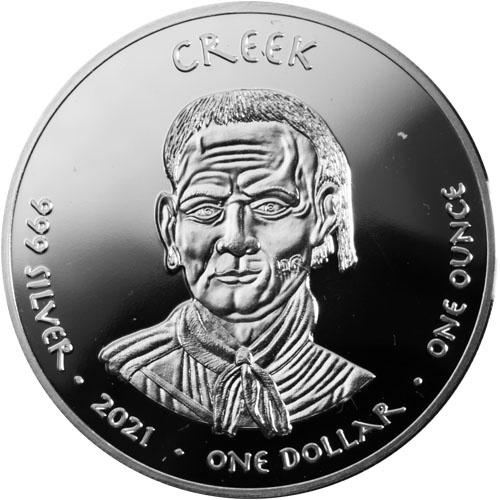 The Proof Silver Dollars from the Native American Mint represent the many diverse indigenous tribes from North America. With each release, a new tribe and its ancestral homeland are featured in distinctive designs. The series covers all the states of the Union and tribes that historically resided both in the United States and Canada. Now, 2021 1 oz Proof Silver Oregon Creek Chinook Salmon Coins are available to you for purchase online at Silver.com.

The indigenous peoples of North America have varied histories and that applies to the Cow Creek Band. Prior to contact with Western powers, the various tribes of the Cow Creek region in Oregon were hunter-gatherers. The tribes would migrate on a seasonal basis, making permanent winter camps and moving the villages along with food sources during summer. The Cow Creek Band as it is known today was actually formed through a deal with the Oregon Superintendent of Indian Affairs.

On September 19, 1853, the Cow Creek Band of Umpqua Tribe of Indians was formed as a known entity through the signing of a treaty between the United States and the villages of people living along the Cow Creek at that time. The tribe itself is named for the Cow Creek, a small tributary that feeds the South Fork stretch of the Umpqua River.

The obverse of the 2021 1 oz Proof Silver Oregon Creek Chinook Salmon Coins features a depiction of a tribal member of the Cow Creek Band. The makeup of the Cow Creek Band actually includes people from various different tribes from the region. The treaty signed in 1853 grouped together all tribes living in the region to include the Upper Umpqua Targunsans, Milwaletas, and Southern Molallas.

On the reverse side of 2021 Proof Silver Creek Chinook Salmon Coins is an image of the largest species of Pacific salmon. The Chinook Salmon is found throughout the North Pacific Ocean and makes its way into inland river systems in the western reaches of North America. The fish can be found in waterways from California to Alaska along the Pacific Coast.

These 2021 1 oz Proof Silver Oregon Creek Chinook Salmon Coins are available to purchase with beautiful proof visuals that include a satin finish and mirrored fields. The coins are packaged individually inside plastic capsules.

Silver.com customer service is available at 888-989-7223 to answer questions about silver for sale. We are also available online through our live chat and email address features.