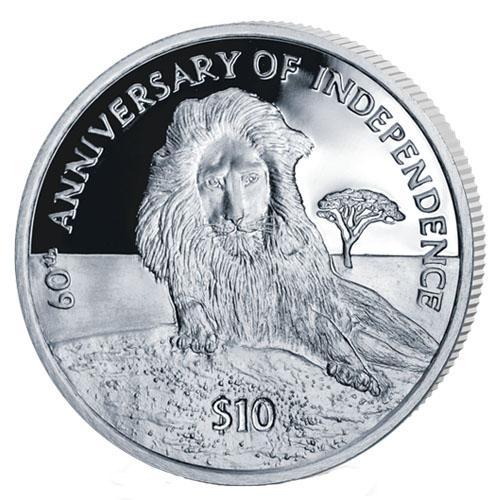 The Pobjoy Mint issues silver bullion coinage for a number of Commonwealth Nations around the world. Among those 54 states, the Republic of Sierra Leone celebrates its 60th anniversary of independence from the United Kingdom in 2021. Right now, 2021 1 oz Proof Sterling Silver Republic of Sierra Leone 60th Anniversary of Independence Coins are available to purchase online at Silver.com.

Each 2021 1 oz Proof Sterling Silver Republic of Sierra Leone 60th Anniversary of Independence Coin listed here comes with individual packaging from Pobjoy Mint. The coins are housed in red presentation boxes and come with a Certificate of Authenticity. Each one is a proof specimen with frosted designs and mirror-like fields. These coins are made with sterling silver content, or .925 fine silver.

The Republic of Sierra Leone is located on the southwestern coast of West Africa. This small nation of roughly 7 million people was first discovered by outsiders when a Portuguese explorer named Pedro de Sintra arrived in 1462. From 1800 to 1961, the nation now known as Sierra Leone was controlled by the United Kingdom as a colony. Most of the population at that time comprised displaced Africans who were brought to the region by the British following the abolition of the slave trade in Britain in 1807. In 1961, the Republic of Sierra Leone gained full independence from the United Kingdom.

On the reverse side of 2021 1 oz Proof Sterling Silver Republic of Sierre Leone 60th Anniversary of Independence Coins is a depiction of an African lion. This large, male lion is shown lying on a rock with an acacia tree in the distant background field.