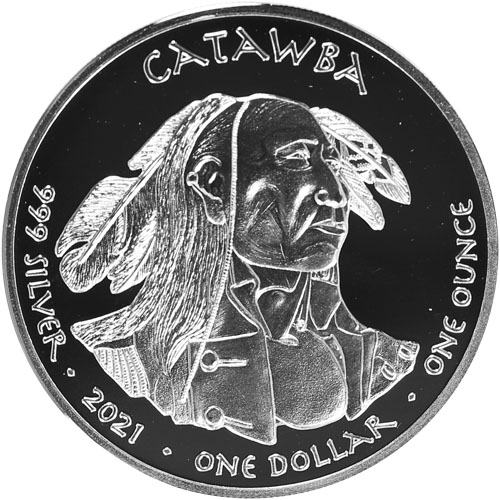 The Proof Silver Dollar Series of coins from the Native American Mint is now in its seventh year of issue. The collection launched in 2015 with designs honoring indigenous North American tribes on the obverse and the historical home range of those tribes in the reverse, along with an animal important to the tribe or native to that region. Today, 2021 1 oz Proof Silver Tennessee Catawba Cave Salamander Coins are available to you online at Silver.com.

Historically speaking, the Catawba people were among the most powerful tribes of indigenous Americans living along the East Coast prior to the arrival of Dutch, French, and English explorers and colonists. Like many of the tribes making early contact with European colonizers, the Catawba made selective alliances with the various sides that benefited them in long-standing conflicts with other indigenous tribes along the East Coast. During the Revolutionary War, this meant an alliance with the American colonists in the war against the British.

All of the 2021 1 oz Proof Silver Tennessee Catawba Cave Salamander Coins listed here come with satin-proof visuals. As a proof coin, each one has a beautiful contrast between the frosted design strikes and the mirrored background fields. The coins in this collection ship with protective plastic capsules. Though a face value is noted on the coins, these items are not legal tender in the US. Only the United States Mint has the authority to issue American coinage with a face value in US dollars.

On the obverse of 2021 Proof Silver Tennessee Catawba Coins is a depiction of a tribal figure from the Catawba Indian Nation. The figure is set in a slight profile relief wearing a colonial-era military jacket. He has long hair from the back of his head, but a shaved top to his head with a single strand of braided hair coming down the side of his face.

The reverse of 2021 Proof Silver Tennessee Cave Salamander Coins features the image of a specific species of salamander. Endemic to the Appalachian Mountains, the Tennessee cave salamander is commonly found in streams that run through cave complexes within the mountains.

Please contact Silver.com with any questions when buying silver. You can call us at 888-989-7223, chat with us live online, or email us directly.