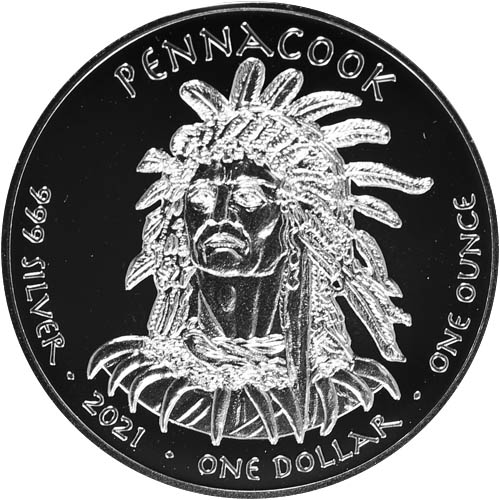 The release of the Vermont Pennacook coin in the Proof Silver Native American Dollar Series is the sixth of 2021 and one of the handful throughout this long-running series to shine a light on a tribe that no longer formally exists. The Pennacook once dominated the Merrimack River valley throughout New Hampshire, Vermont, Massachusetts, and portions of southwestern Maine. Now, the Pennacook have all but disappeared, their descendants having been absorbed into larger Abenaki tribes over the centuries. Today, 2021 1 oz Proof Silver Vermont Pennacook Northern Leopard Frog Coins are available to you online at Silver.com.

The Pennacook were not a singular tribe, but rather a confederacy that consisted of 18 sub-tribes at the height of its power in the early 17th century. One of the first indigenous tribes in North America to have contact with Europeans, the Pennacook encountered Giovanna da Verranzano in 1524 as he led a French expedition that had landed on the East Coast of the continent and was seeking a route through the continent to the Pacific Coast.

All of the 2021 1 oz Proof Silver Vermont Pennacook Northern Leopard Frog Coins available in this product listing come with a protective plastic capsule. The coins available in this series come with a satin-proof visual. This means the coins have frosted designs with a mirrored field in the background. As with all other coins in this collection, the nominal value assigned to the coins is backed by the Jamul Sovereign Nation, but the face value is not legal tender in the United States.

On the obverse side of 2021 1 oz Vermont Pennacook Northern Leopard Frog Coins is a depiction of a tribal elder from the Pennacook. This figure’s portrait includes a large ceremonial headdress and a necklace made with what appears to be bear claws or even cougar claws. The Pennacook were estimated to have had a population of around 12,000 living across the 18 sub-tribes in the confederacy prior to European arrival. Typhus was one of the many European diseases that came over with explorers that wrought devastation on the population of the Pennacook.

The reverse field of 2021 1oz Proof Silver Pennacook Northern Leopard Frog Coins depicts a spotted frog. The frog is a species within the leopard frog family that is found in parts of Canada and more broadly in the United States.

Please contact Silver.com with questions about these silver coins for sale. You can call us at 888-989-7223, chat with us live online, or email us directly.