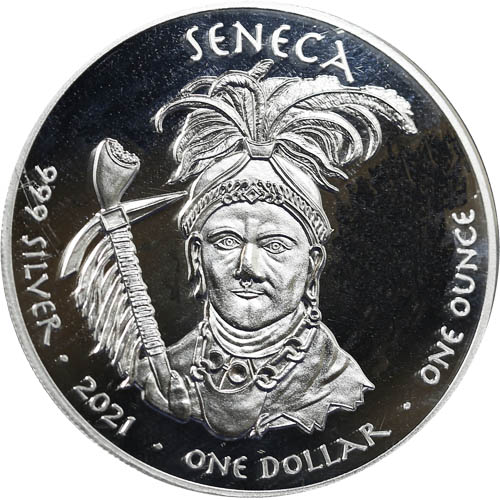 In a coin series that offers an indigenous twist on the US Mint’s ATB Series, the Native American Mint’s Proof Silver Dollar Series seeks to represent the indigenous people who have occupied all regions of the Americas for thousands of year. Each release represents a different tribe and an animal native to their original home region. Now, 2021 1 oz Proof Silver West Virginia Seneca Wild Boar Coins are available to you for purchase online at Silver.com.

The Seneca people are historically associated with the Ohio River Valley near Lake Ontario. One of the many cultural groups in the Iroquois League, the Seneca lived in the regions around what are now Western New York, Pennsylvania, and Ohio. However, starting in the 1700s, it is believed the Seneca began to spend time in what is now the state of West Virginia.

The obverse of 2021 1 oz Proof Silver West Virginia Seneca Wild Boar Coins features an image of a tribal figure from the Seneca. The Mingo people are less of a specific tribe of Seneca and more of a multi-cultural group with ties to the Seneca and other members of the Iroquois League. It is believed that once the Iroquois-speaking people pushed out the Huron, these groups then used the region as a seasonal hunting ground.

On the reverse side of 2021 Proof Silver Seneca Wild Boar Coins is a depiction of the wild boar. Native to Eurasia and North Africa, the wild boar is a species of pig that was later introduced to the Americas and has shown a tremendous capacity for large-scale breeding and overpopulation.

These 2021 1 oz Proof Silver West Virginia Seneca Wild Boar Coins are available with individual acrylic capsules. Each coin boasts a satin-proof finish with frosted visuals on the designs and a mirror-like field.

Silver.com customer service is available to you at 888-989-7223 with questions about silver for sale. You can also chat with us live online or email us directly.