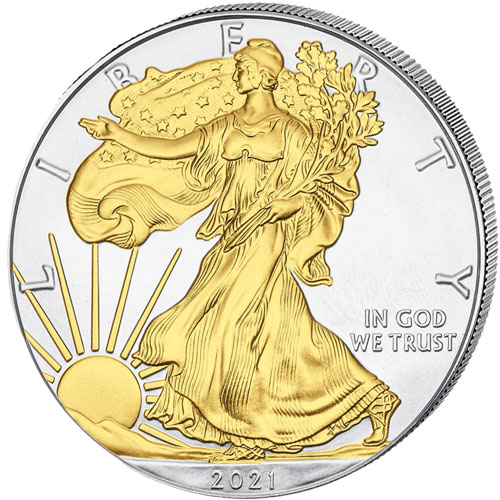 The 2021 release of the Silver Eagles from the United States Mint features the first-ever dual-release from the mint in this series. 2021 is the 35th anniversary of the series and brings with it a new reverse design of the American bald eagle. However, those new designs weren’t ready for the reverse yet when 2021 coining began, resulting in an initial release of 2021 Silver Eagles with the original design combinations and a later release with the new design combination. Now, 2021 1 oz Silver American Eagles are available to you for purchase online at Silver.com.

The United States Mint has never altered the visual appearance of its Silver American Eagles since the 1986 debut of the series. The only major change ever to come to the appearance of the coins was in 2016 when the Proof Silver Eagles, and only the Proof Silver Eagles, were given edge-lettering for the first time to mark the 30th anniversary of the popular bullion series.

For the first time ever, one of the major design elements changes in the Silver American Eagle. While these 2021 Silver American Eagle Gilded Coins are early issues with the original design combinations of Walking Liberty and the Heraldic Eagle, a new eagle design features on the reverse from mid-2021 onward. That makes the 2021 Silver Eagle the first-ever dual-release with different design combinations.

On the obverse of these 2021 1 oz Silver American Eagles is the image of Walking Liberty. This version of Liberty’s figure was created in 1916 by Adolph A. Weinman for the US half dollar. It depicts Liberty in left-profile relief with the sun rising over a mountaintop on the horizon. The effigy of Liberty, the ground upon which she walks, and the sun cresting the mountain the distance are all covered with a thin layer of 24-karat gold in this special gilded release.

The reverse face of 2021 Silver American Eagles offers the final chance to own the coin with the heraldic eagle design. John Mercanti developed this image of the heraldic eagle to include the US national shield, the olive branch of peace, and the arrows of war in its talons. Over the head of the eagle is a cluster of 13 stars arranged in a triangular formation.

These 2021 1 oz Silver American Eagles are gilded specimens with a thin layer of 24-karat gold on the obverse. It is limited to the figure of Liberty, the land beneath her feet, the mountain on the horizon, and the sun cresting its peak. All of these coins are in Brilliant Uncirculated condition and packaged in plastic capsules.

Silver.com customer service is available to assist you at 888-989-7223. You can also connect with us online through our live chat and email address features.