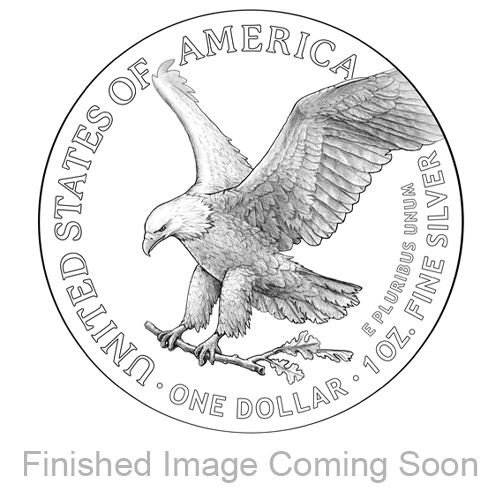 Reimagining the Silver American Eagle in 2021

The Silver American Eagle is one of the world’s most recognizable silver bullion coins. Available from 1986 with the same obverse and reverse designs, the US Mint is reimagining the bald eagle visual on the Silver Eagle coin in 2021 to mark the 35th anniversary of the series. For the first time ever, a major design element is being replaced in the series with the debut of a new reverse capturing the bald eagle in its natural element. Designed by Emily Damstra, the new reverse will debut on 2021-dated Silver Eagles by mid-2021, with Silver.com offering the newly designed 2021 Silver Eagle for presale by early Summer 2021. Read on to learn a little more about the new Silver Eagle imagery.

The Eagle in Flight

For the new reverse design element of Silver American Eagles, the US Mint debuts a visual of the bald eagle in flight. In this design, the bald eagle is depicted with its wings stretched out behind its figure as it descends down toward an unseen nest with a large oak branch in its talons. The bald eagle builds the largest tree nest of any bird species, second only to the nests of the ostrich. With the new design comes new arrangements for the inscriptions. Around the edge of the design field, you will find inscriptions of “United States of America” and “One Dollar – 1 oz. Fine Silver.” Within the design field, behind the eagle’s tail feathers, you will see “E Pluribus Unum.”

The US Mint considered a total of 36 different designs as the possible replacement for John Mercanti’s long-running heraldic eagle on the reverse. The chosen design came from Emily Damstra. Ms. Damstra holds an M.F.A. in science illustration earned at the University of Michigan and focuses on the creation of illustrations based in zoology, botany, anthropology, ecology, and paleontology. Her career includes a range of popular designs from major coin programs that include two designs in the Canadian Wildlife Series and four in the Birds of Prey Series at the Royal Canadian Mint, as well as two designs in the America the Beautiful Series at the United States Mint. Ms. Damstra’s work on the new Silver Eagle design comes as a member of the United States Mint Artistic Infusion Program.

Facts on the Silver Eagle Series

The BU Silver Eagles from the US Mint have been available each year since the 1986 debut of the series. Here are a few fun facts on the Silver Eagle Series: