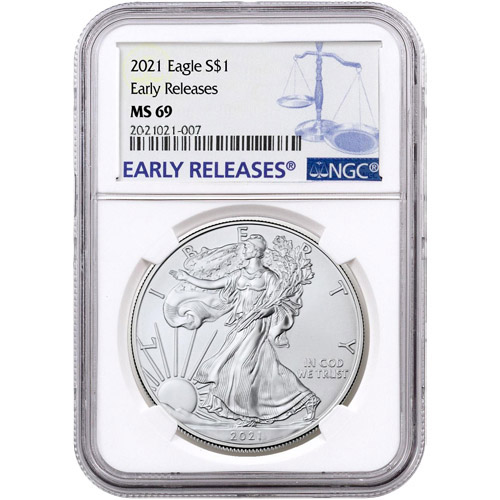 IRA Eligible!
PRESALE ITEM: Shipping on or around - January 29th, 2021

Customers Note: This is a presale item and is not expected to ship until around January 29th, 2021. EVERY order containing this item will be held from shipping until that date. Please note that this date is a rough estimate and solely depends on the mint meeting their production schedule.

Any quantity available for $11.49 per coin over spot!

As part of the 35th-anniversary celebration of the Silver American Eagles, the United States Mint plans to release a new reverse design element capturing a more real-life image of the bald eagle. However, 2021 is going to be a unique year in the series as the new design on 2021-dated coins won’t arrive until mid-year. That means early 2021 Silver Eagles, like these certified specimens, feature the original design combinations. Today, 2021 1 oz Silver American Eagles are available to you online at Silver.com in near-perfect condition.

Since 1986, the United States Mint has featured a design of the heraldic eagle of the United States on the reverse of its Silver Eagles. The design was modernized in 1986 by John Mercanti, the 12th Chief Engraver of the US Mint. In the design, a powerful bald eagle is featured with the most notable change from previous versions being the triangular cluster of 13 stars above its head. By mid-2021, the new Silver Eagle reverse design will debut in the series, making these early issues in 2021 the last chance to own the original combinations.

All of these 2021 1 oz Silver American Eagles earned MS69 certifications from the NGC. Mint State 69 coins are considered near-perfect specimens that have full, original mint luster with a maximum of two minor detracting flaws present. Examples of these flaws are limited to minuscule contact marks or hairlines and must be located outside of the primary visual field. Also included with these coins is an Early Release designation. This indicates the coins were received by the NGC for grading within 30 days of release by the US Mint.

Walking Liberty is shown in the obverse design of 2021 Silver American Eagles. This Liberty image captures her figure in left-profile relief as she walks toward the sun on the horizon with her right hand outstretched and her left holding branches of oak and laurel. The design first appeared on the US half dollar from 1916 to 1947.

America’s heraldic eagle is found on the reverse of 2021 1 oz Silver Eagles. The heraldic eagle is America’s oldest coin design still in use. Debuting on some of the first US denominations in 1794, the heraldic eagle has been modified numerous times in American history by the likes of Christian Gobrecht, James B. Longacre, George T. Morgan, and Charles E. Barber, all of whom previously held the post of Chief Engraver of the United States Mint.

Please feel free to contact Silver.com with your questions. Our team is available to assist you at 888-989-7223, online through our live chat, and via our email address.