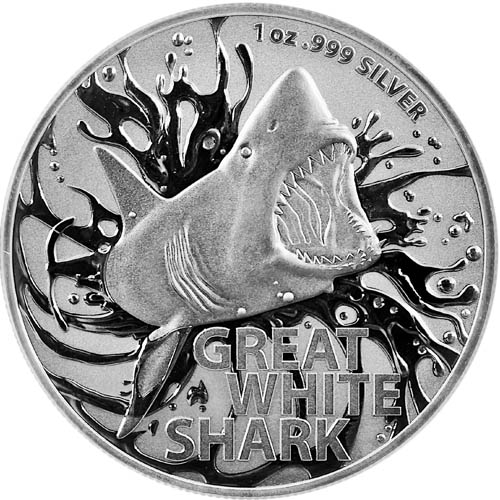 The silver coins for sale from the Royal Australian Mint in its new “Australia’s Most Dangerous” series now have a second design with the fearsome, powerful Great White Shark. A species of mackerel shark, the Great White is one of the best-known shark species in the world and gained international notoriety and fear following Steven Spielberg’s film adaptation of the novel Jaws. Now, 2021 1 oz Silver Australian Great White Shark Coins are available to you for purchase online at Silver.com.

The Carcharodon carcharias is the scientific name for one of the deadliest creatures in the ocean. The Great White Shark, sometimes called the white pointer, is a massive shark species that sees female sharks reach greater lengths and weights than the males. The largest female specimens recorded were up to 20 feet in length and 5,000 pounds in weight.

When it comes to swimming in the world’s oceans along coastlines from the Atlantic Coast of North America to the Pacific Coast of Australia, the Great White is the one creature that many fear. A lot of this fear stems from the novel Jaws written by Peter Benchley, which came to the big screen in terrifying context in the feature film of the same name that was adapted by Steven Spielberg.

Queen Elizabeth II is featured on the obverse of the 2021 1 oz Silver Australian Great White Sharks. The design of the Queen shown here is a right-profile bust that serves as the sixth-generation effigy of Her Majesty used on Australian coins during her reign. It depicts the Queen at the age of 89 and was created in 2015 by Jody Clark for the Royal Mint of England.

A Great White Shark uses its muscular frame and tail to leap from the water with its massive jaws open in the reverse field of the 2021 Silver Australian Great White Shark. The design element shows the razor-sharp teeth of the great white, teeth that are often several inches in length, as the shark makes a splash leaping out of the water.

These 2021 1 oz Silver Australian Great White Shark Coins are available to you inside of individual acrylic capsules. Each coin is in Brilliant Uncirculated condition and comes from the Royal Australian Mint with a mintage cap of 25,000 silver coins.

Silver.com customer service is available to assist you with any questions at 888-989-7223. Alternatively, you can chat with us live online or submit your questions via email.