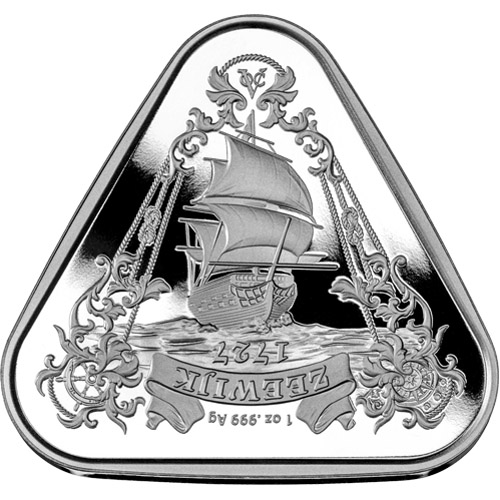 The gold and silver for sale in the Australian Shipwreck Series comes to a conclusion with the release of a fourth design bearing a 2021 date mark. The Royal Australian Mint introduced the series in 2020 featuring images of Dutch East India Company ships that met untimely ends off the coast of Western Australia. Today, 2021 1 oz Silver Australian Shipwreck Zeewijk Coins are available to you online at Silver.com.

All of the coins released in the Silver Shipwreck Series at the Royal Australian Mint feature a distinctive triangular shape and a unique reverse design. On the reverse of each design in the collection, the represented ship is shown intact as it sails along the waters of the ocean. However, the inscriptions on this side are upside down. In order to read the inscriptions right side up, you have to turn the ship upside down. This unique twist puts the ship in the position it inevitably wound up on the seabed.

Queen Elizabeth II is on the obverse of 2021 Silver Australian Shipwreck Zeewijk Coins. The design of the Queen’s effigy is located in one of the three corners of the triangular coin. As you view the Queen’s portrait oriented in an upper corner, you will see the images that played out as the survivors of the Zeewijk’s shipwreck devised a plan for their own rescue.

The Zeewijk was shipwrecked on June 9, 1727, on Half Moon Reef along the western edge of the Pelsaert Group, a coral reef in the Houtman Abrolhos island chain. 10 men drown during the first attempt to launch a boat from the Zeewijk. Eventually, the crew was ferried to Gun Island. The crash snapped off the mainmast and dislodged the rudder on the Zeewijk. Though it was intact, it was no longer seaworthy and the crew believed it would be impossible to float the ship again.

In the reverse design of 2021 1 oz Silver Australian Zeewijk Coins, the Zeewijk is shown in its former glory as it sails along the ocean. The survivors chose the 11 fittest members and First Mate Pieter Langeweg to set sail in the ship’s longboat for Batavia in July 1727 to seek help. Those men were never seen or heard from again. In the end, 82 of the original 208-man crew survived and reached Batavia in April 1728 in a ship they built from the parts of the Zeewijk and local mangroves from Gun Island.

Please contact Silver.com with any questions. Our customer service team is available at 888-989-7223, online using our live chat, and through our email address.