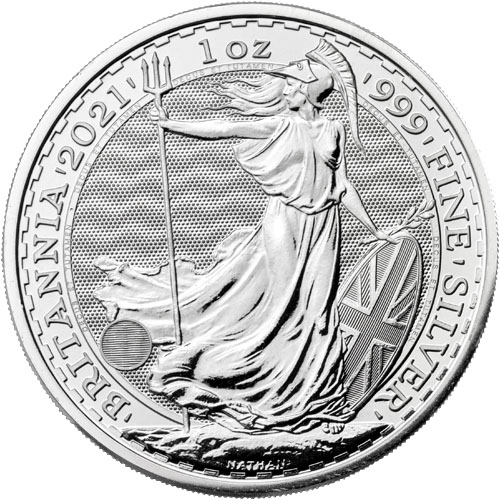 The Silver British Britannias debuted in 1997, one decade after the program launched in 1987 with a gold bullion coin. The 1 oz Silver Britannia shares the same beautiful design as the Gold Britannia and was the second of three coins in the collection, with a Platinum Britannia later added in 2018.

In 1987, the Royal Mint of England commissioned an art contest to find a new, modern image of Britannia for use on a new national bullion coin series. The Gold Britannia was the first coin introduced in this collection as a response to the growing number of bullion coins from mints in the Western world as an economic boycott over South Africa’s system of apartheid had pinched supplies of the Gold Krugerrand.

Philip Nathan was the artist whose Britannia bust was chosen to represent the female personification on the new Britannia Series of bullion coins. This was not the first time Britannia had featured on British coins. The first Britannia images on a coin appeared in the 1st century AD during the Roman Empire’s rule over the British Isles. Since the union of the crowns of Scotland and England in 1707, Britannia has regularly featured on circulation currency.

The obverse of 2021 1 oz Silver British Britannias includes a right-profile bust of Queen Elizabeth II. This right-profile portrait of the Queen is the fifth-generation design during her reign and was created in July 2015 by Jody Clark, the youngest artist to ever create a monarch’s portrait for the Royal Mint of England.

On the reverse side of the 2021 Silver British Britannia is a depiction of Britannia. The female personification of Britain, she stands along the coast with a shield at her side bearing the Union Jack emblem and a trident in her right hand granting her control over the seas.

In the new reverse field of 2021 Silver Britannias, the Royal Mint has included four all-new security elements. The background field bears a surface animation that changes with the angle of viewing to reflect the rolling waves of the ocean. The new latent security feature also changes imagery with different angles of viewing to show either a trident or a padlock. Also included in the design are tincture lines within the stripes of the Union Jack flag and micro-text inscriptions that translate from Latin to English as “An Ornament and a Safeguard.

These 2021 1 oz Silver British Britannias are available to you individually or in multiples. Individual coins ship inside of protective plastic flips. Multiples of 25 are housed inside of mint tubes, with multiples of 500 housed in Monster Boxes. The box contains 20 individual 25-coin tubes. All coins are available in Brilliant Uncirculated condition.

Silver.com customer service is available to assist you on the phone at 888-989-7223. We are also available to you online through our live chat and email address features.