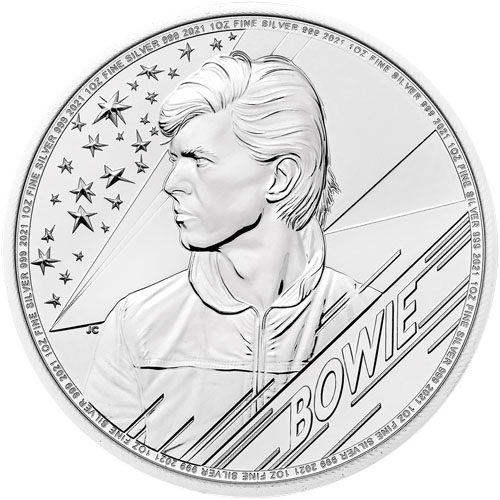 David Bowie is honored in the third release of coins in the British Music Legends Series. The collection debuted from the mint in 2020 and featured Queen in the first release. After Elton John featured in the second design, the Royal Mint moves on to depict another major single artist in the form of David Bowie. Now, 2021 1 oz Silver British Music Legends David Bowie Coins are available to you for purchase online at Silver.com.

David Bowie experienced uneven success throughout his long career. His first top-five entry in the UK Singles Chart was “Space Oddity,” an album released in 1969 some seven years after he started his pursuit of a professional career in music. He went on to experiment with new sounds and presentations in the early 1970s, emerging from it in 1972 with the alter ego of Ziggy Stardust.

His transformation to Ziggy Stardust meant the start of the glam rock era, but it also resulted in the alienation of large segments of his fanbase in the United Kingdom. However, his new glam rock appearance and sound gained him a new audience in the United States. The remainder of Bowie’s career would see a variety of transformations in his style, eventually becoming a hallmark of his career.

The obverse side of 2021 1 oz Silver David Bowie Coins features Queen Elizabeth II. This right-profile portrait of the Queen was designed in July 2015 by Jody Clark and represents the fifth effigy of the Queen during her reign to feature on British coins. The design shows the Queen with the George IV State Diadem Crown. This crown is a part of the formal Crown Jewels of England and comes with 1,333 diamonds in its setting that weigh more than 300 karats.

On the reverse face of 2021 Silver British Music Legends David Bowie Coins is an effigy of Bowie. The portrait captures an image of the artist during his Aladdin Sane era, a period of time that saw his sixth album released and the first album released while he was a well-known star. Design elements on the coin include a field of stars in the upper left, a lightning bolt behind him, and his popular typeface of “BOWIE.”

These 2021 1 oz Silver British Music Legends David Bowie Coins are available to purchase individually or in bulk. Individual coins come with a plastic capsule, multiples of 20 coins in a roll, and boxes of 100 coins. The box holds five rolls. All coins are in Brilliant Uncirculated condition.

Silver.com customer service can answer your questions at 888-989-7223. We are also available online using our live chat and email address features.