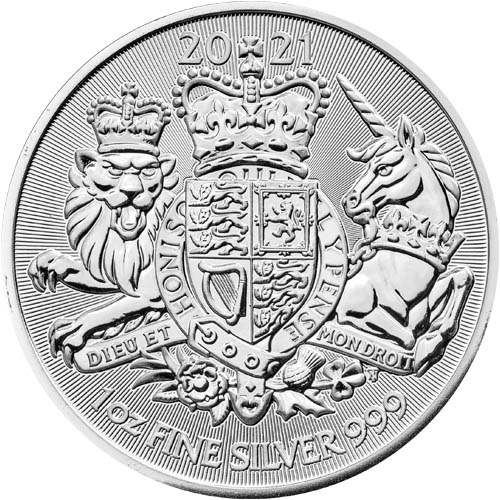 The Royal Arms of England is the official symbol of the monarchy and the kingdom, and it is one that is recognized around the globe. The first official version of the Royal Arms was adopted back in 1198 during the reign of King Richard I. Since that time, the emblem has been modified several times and changed to reflect the changes within the kingdom. Now, 2021 1 oz Silver British Royal Arms Coins are available to you for purchase online at Silver.com.

Initial versions of a coat of arms representing the monarch and the kingdom came to England with the rise of the Plantagenet monarchs in the 12th century. Prior to the reign of King Richard I, examples of emblems representing the monarch included battle insignia with a bust of one lion. Richard I often used two lions on his insignia, but eventually adopted the now-famous Three Lions of England.

The Three Lions of England served as a coat of arms for England and the first official Royal Arms of England. Over the next 800 years, the Royal Arms evolved to be more than just a symbol of England, but a symbol of the United Kingdom as it grew. The seal now consists of a quartered shield with the coats of arms for England, Scotland, and Ireland, with the heraldic animals of England and Scotland in support of the shield on either side.

Queen Elizabeth II is featured on the obverse side of 2021 1 oz Silver British Royal Arms Coins. Her Majesty is depicted at the age of 89 in right-profile relief as she wears the George IV State Diadem Crown, a piece from the official Crown Jewels that consists of more than 1,333 diamonds in its setting.

England’s modern Royal Arms is depicted in the reverse design of the 2021 Silver British Royal Arms Coins. The quartered shield is crowned by the Imperial State Crown and supported on the left by the crowned Lion of England and on the right by the Unicorn of Scotland. The shield is quartered with the Three Lions of England, Lion of Scotland, and Harp of Ireland representing the member nations of the United Kingdom.

These 2021 1 oz Silver British Royal Arms Coins are available to you for purchase in Brilliant Uncirculated condition. Individual coins come with a protective plastic flip. Multiples are available in acrylic tubes of 25 or Monster Boxes of 500.

Silver.com customer service is available to you on the phone at 888-989-7223. We are also available on the web through our live chat and email address services.