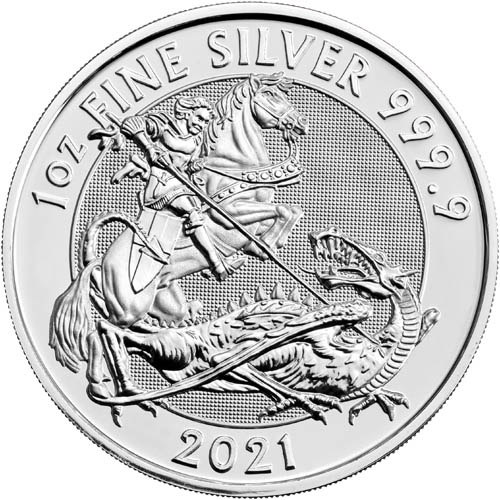 For those who buy silver from the Royal Mint of England, there are many options available outside the Silver Britannia and Silver Queen’s Beast Collections. The Silver Valiant Coins were introduced in 2019 by the mint with images of one of the most important mythical figures in the history of England: St. George. Right now, 2021 1 oz Silver British Valiants are available to purchase online at Silver.com.

Each of the 2021 1 oz Silver British Valiants available in this product listing comes with a Brilliant Uncirculated condition. The coins are offered in individual or multiples packaging options. Single coins will arrive inside of individual plastic flips. Multiples of 25 coins come in mint tubes, while multiples of 500 coins come in Monster Boxes. The box contains 20 separate 25-coin tubes.

The story of St. George slaying a dragon dates all the way back to the iconography of the militarized saints Theodore, George, and Demetrius as horsemen. These individuals were identified as Thracian horsemen in Roman-era writings and even though the man known as St. George died in 303, his legend would grow starting in the early 12th century. British soldiers fighting in the Crusades in the Holy Land in the late 12th century would eventually bring tales of St. George back to the British Isles.

The obverse field of 2021 1 oz Silver British Valiants comes with an image of Queen Elizabeth II. Her Majesty is depicted in right-profile relief in this design and wears the George IV State Diadem Crown. Created in 2015 by Jody Clark, this image is the fifth-generation bust of the Queen and has featured on British coins starting with the 2016 date mark.

On the reverse side of 2021 Silver British Valiants includes a depiction of the famed St. George as he slays a dragon. In this distinctive design, St. George rides powerfully into the conflict on his horse with a shield bearing St. Andrew’s cross at his side and a long spear in his hand that he uses to slay the vexing beast.

If you have any questions, Silver.com is happy to help. You can call us on the phone at 888-989-7223, chat with us live online, or simply send us an email with your inquiries.