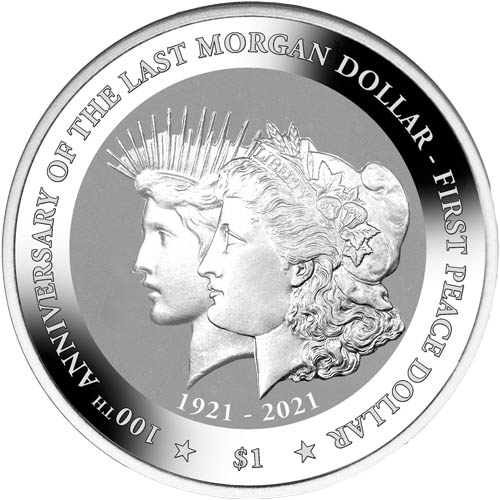 In 1921, the United States Mint completed the last overhaul of its 19th-century coin designs. The US penny, Gold Eagle denominations, the quarter, the dime, and the half dollar had all been brilliantly redesigned by 1921. As silver dollar coining resumed in the country, the US Mint first used the historic Silver Morgan Dollar design that had last been struck in 1904. By December 1921, a redesign had been completed and the Silver Peace Dollar entered production on the 28th of the month. 2021 marks the 100th anniversary of this transitional period for the silver dollar. Now, 2021 1 oz Silver British Virgin Islands 100th Anniversary Morgan and Peace Dollar Coins are available to you for purchase online at Silver.com.

Back in 1878, the US Mint ended a five-year hiatus in the coining of silver dollars in the nation with the introduction of a new design. Named in honor of the Assistant Engraver who developed the images, George T. Morgan, the Silver Morgan Dollars were issued by the US Mint from 1878 to 1904. Silver coining in the $1 denomination ended again that year and did not resume until after World War I.

In 1921, the US Mint had to create a brand-new master die to strike Silver Morgan Dollars. Fortunately, George T. Morgan was still with the mint and serving as Chief Engraver at this time and was able to develop the new die. By December, a new design for both sides of the silver dollar debuted. Created by Anthony de Francisi, the Peace Dollar had softer imagery with a  peaceful image of Liberty and the design of an eagle at rest on the reverse.

The obverse of these commemorative 2021 1 oz Silver BVI 100th Anniversary Morgan and Peace Dollar Coins includes the bust of Queen Elizabeth II. The design appears on all Pobjoy Mint-issued coins. The British Virgin Islands is a British Overseas Territory, but the island group has long used the United States Dollar as its official currency, making a BVI release honoring the Morgan and Peace Dollars fitting.

On the reverse side of 2021 1 oz Silver British Virgin Islands Morgan and Peace Dollar Coins are the two left-profile portraits of Liberty from the 1921 US silver dollar. The Morgan Dollar effigy of Liberty is in the foreground, with the Peace Dollar depiction of Liberty in the background.

These 2021 1 oz Silver British Virgin Islands 100th Anniversary Morgan and Peace Dollar Coins are available to you with individual plastic flips. The coins are in Brilliant Uncirculated condition and boast reverse-frosted visuals. This includes a mirrored appearance for the designs, which are set against a frosted background.