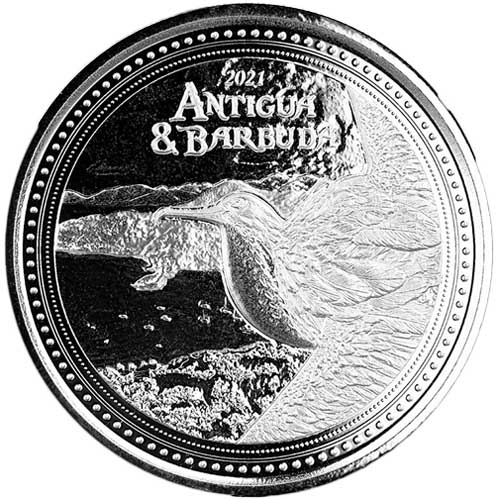 The EC8 Series from Scottsdale Mint celebrates eight of the island nations from the Eastern Caribbean that are members of the Eastern Caribbean Central Bank. The ECCB oversees the monetary policy of its members and provides financial stability for the broader region through its fiscal decision-making. Each of the eight member nations is represented in a release within the EC8 Series. Now, 2021 1 oz Silver EC8 Antigua and Barbuda Coins are available to you for purchase online from Silver.com.

The EC8 Series represents the nations of Antigua and Barbuda, Dominica, Grenada, Montserrat, Saint Kitts and Nevis, Saint Lucia, Saint Vincent and the Grenadines, and Anguilla. The first seven nations listed above were founding members of the Organization of Eastern Caribbean States, founded in 1981. Anguilla was admitted as an associate member in 1995.

The obverse side of 2021 1 oz Silver EC8 Antigua and Barbuda Coins features a portrait of Queen Elizabeth II. This depiction of the Queen is found at the center with two fern leaves creating a frame around the portrait of Her Majesty. The Queen is shown here in right-profile relief wearing the Girls of Great Britain and Ireland Tiara, a tiara that was originally gifted to her grandmother, Mary of Teck.

These 2021 1 oz Silver EC8 Antigua and Barbuda Coins are available to you in Brilliant Uncirculated condition. The coins in the silver BU range are offered individually in plastic capsules, by multiples of five in skinboards, and by multiples of 125 in boxes.

Silver.com customer service is available to assist you with questions when you buy silver at 888-989-7223. Our team is also available to you online through our live chat and email address features.