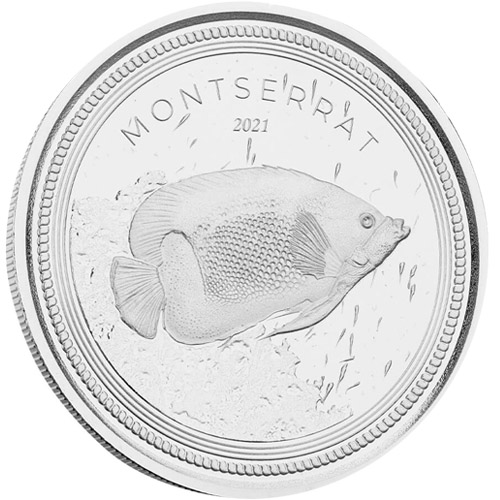 Though early European explorers sought treasure and fortune on the Eastern Caribbean Islands, today, these exotic locations are prime vacation spots and considered by many to be among the most beautiful places on earth. To celebrate these majestic islands, Scottsdale Mint once again teams up with the Eastern Caribbean Central Bank for the 4th release in the EC8 series. Currently, 2021 1 oz Silver EC8 Montserrat Coins can be purchased from Silver.com.

2021 1 oz Silver Montserrat Coins are produced by Scottsdale mint using .999 fine silver. Every coin arrives to you in Brilliant Uncirculated condition. Scottsdale also produced this coin in gold and colorized versions. These silver coins are shipped in plastic capsules, skinboards of 5, or boxes of 125 coins.

Montserrat is one of eight majestic islands in the Eastern Caribbean. These small islands form an arc from Puerto Rico to Venezuela, and are considered primary getaway options for vacationers around the world. Montserrat includes the serene beaches and crystal-clear waters you would expect from a Caribbean Island. But its main draw might be the Soufriere Hills Volcano, which became active in 1995 and continues to erupt to this day. Vacationers can see it from a distance at the Montserrat Volcano Observatory.

Queen Elizabeth is seen on the obverse side of 2021 1 oz Silver Montserrat Coins. This effigy of Her Majesty was designed by Ian Rank-Broadley in 1998. Ever since then it has been featured by many Commonwealth Nations, such as Britain, South Africa, and Australia. Along the rim of the coin are the words Eastern Caribbean Central Bank, 1 oz .999 Silver, Queen Elizabeth II, Two Dollars.

A Pomacanthus navarchus, also known as a Blue Girdled Angelfish, is featured prominently on the reverse of 2021 1 oz Silver EC8 Montserrat Coins. These beautiful marine creatures are known for their vibrant blue and yellow colors, as well as their laterally flat bodies. These fascinating sea creatures actually start their life as female before becoming male later on. Popular in both the ocean and in aquariums, these fish can live for up to 20 years. On the border of the coin is the inscription Montserrat 2021.

If you have any questions about this product, feel free to contact our team at Silver.com. We can offer assistance through our online live chat or email address features, or on the phone at 888-989-7223.