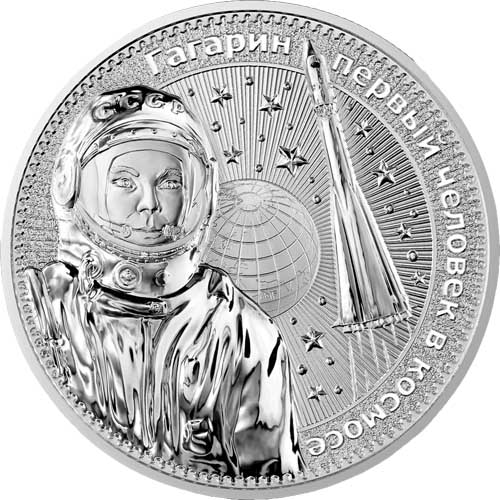 The newest series from the Germania Mint offers silver rounds for sale that celebrate the biggest achievements of the Soviet space program. The new Interkosmos Series offers 1 oz BU silver rounds alongside other collectible, low-mintage options. First up in the collection is a design honoring the first person in outer space, Yuri Gagarin. Today, 2021 1 oz Silver Germania Interkosmos Gagarin Rounds are available to you online at Silver.com.

On April 12, 1961, Yuri Gagarin lifted off from Earth powered by a Vostok 1 rocket. His destination was orbit around planet Earth, with his capsule completing one revolution around the planet before he returned to Earth. Gagarin’s achievement was celebrated heavily in the Soviet Union. However, he became a victim of his own success. After the deadly failure of the Soviet space program’s Soyuz 1 program, the government feared the loss of a national hero like Gagarin and barred him from any further space flights as a result.

All of these 2021 1 oz Silver Germania Interkosmos Gagarin Rounds are available with an individual plastic capsule. The rounds in this release are available in Brilliant Uncirculated condition and have a limited mintage set at just 15,000 rounds.

On the obverse of 2021 Silver Germania Interkosmos Gagarin Rounds is an image of the Cosmonaut Yuri Gagarin. He is depicted in the foreground of the design field wearing his full spacesuit. Planet Earth is depicted in the background field with the Vostok 1 rocket also included in the design element.

The reverse side of the 2021 1 oz Silver Interkosmos Gagarin Rounds features the State Emblem of the Soviet Union. The seal of the Soviet Union became famous around the world after World War II. Its hammer-and-sickle combination has been subsequently adopted by countless other communist nations around the globe.

Please don’t hesitate to reach out to Silver.com if you have any questions. Our team is available on the phone at 888-989-7223, online using our live chat, and via our email address.