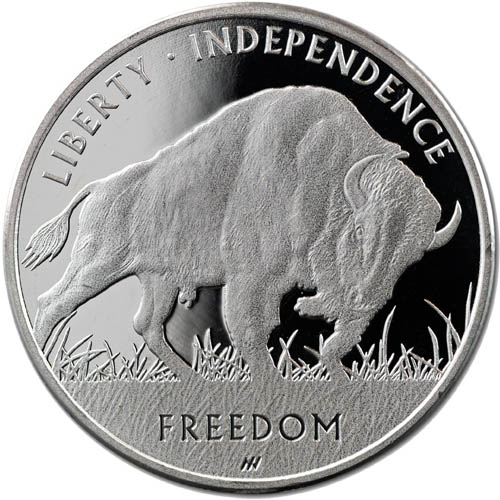 One of the more inspiring symbols of freedom and independence known in the Western world is the indigenous American leader Sitting Bull. In the first release of a new annual silver bullion series, .999 fine silver rounds are available with an effigy of Sitting Bull on the obverse and a powerful American bison on the reverse. Right now, 2021 1 oz Silver Liberty Trade Buffalo Rounds are available to purchase online from Silver.com.

Each of the 2021 1 oz Silver Liberty Trade Buffalo Rounds available in this Silver.com listing comes in all-new condition from the mint. The rounds are packaged individually with protective flips. Multiples of 20 rounds will arrive in plastic tubes, while multiples of 500 will ship in a Monster Box. The box can hold a total of 25 individual tubes of 20 rounds each.

The new silver rounds in the 2021 Silver Liberty Trade Buffalo Round come with beautiful enhancements that boost the visual appeal of the designs. First and foremost, the rounds have reverse-proof visuals that include mirror-like design elements overlaying frosted background fields. Additionally, the background on the obverse has a textured, Sioux-textile element that creates a stunning finish.

On the obverse of 2021 1 oz Silver Liberty Trade Buffalo Rounds is an image of Sitting Bull. Depicted in right-profile relief, Sitting Bull has a stoic gaze on his face as he wears traditional Sioux clothing and a large, feathered headdress. The weight, purity, metal content, and date mark of the release feature on this field of the round.

Sitting Bull was an influential Sioux leader from the Hunkpapa Lakota tribe. He is most famously remembered for his leadership during the Battle of the Little Bighorn, a stunning victory for a confederation of Northern Cheyenne tribes and Lakota tribes over the 7th Cavalry of the United States Army.

The reverse side of the 2021 Silver Liberty Trade Buffalo Round comes with a depiction of the American bison. The powerful bison is depicted charging across the Plains in this design. Taken together with the symbol of Sitting Bull on the obverse, these images capture a unique take on liberty, freedom, and independence.

If you have any questions about these silver rounds for sale, please feel free to ask. Silver.com customer service is available at 888-989-7223, online using our live chat, and via our email address.