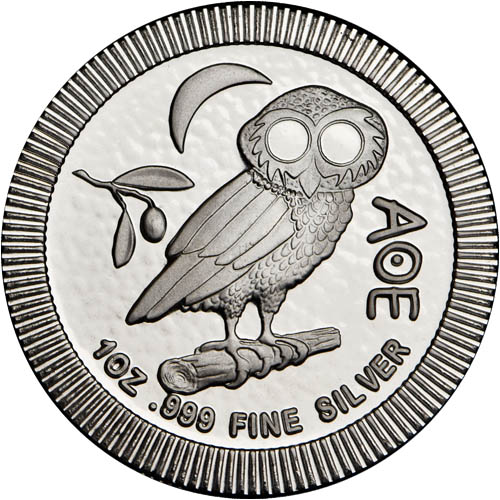 One of the more exciting silver coin collections available in recent years is the Silver Athena Owl Collection. These coins are notable not only for the stackable rim design of the coins, but also for the historic design feature on the reverse of the coin. While some mints reach back to the early 20th or even 19th centuries for design inspiration, the Silver Niue Athena Owl coins reach all the way back to as early as 510 BCE for inspiration. Now, 2021 1 oz Silver Niue Athena Owl Stackable Coins are available to you for purchase online at Silver.com.

While the coins were widely issued between 510 BCE and 38 BCE, the most popular design in the series was the Athena bust. These coins featured a stamped image of Athena’s head in right-profile relief on the obverse and the owl of Athena on the reverse field. The exact reverse design from those coins is now available on the reverse of the modern Silver Niue Athena Owl Stackable Coins.

Queen Elizabeth II is found on the obverse of 2021 1 oz Silver Niue Athena Owl Stackable Coins. The bust of Elizabeth II found here is the fourth-generation effigy from the Royal Mint of England and the fifth-generation design to feature on various South Pacific Commonwealth nations. The design shows the Queen in right-profile relief with the Girls of Great Britain and Ireland Tiara on her head.

A design known as the Owl of Athena is found on the reverse side of 2021 Silver Niue Athena Owl Stackable Coins. The owl is featured in a slight right-profile relief with both eyes looking forward at the viewer. The owl is perched on a small branch with a crescent moon visible above its head and an olive sprig behind its feathers. The obverse and reverse sides of the coin both have raised-and-lowered edges that enable easy, secure stacking of the silver coins.

These 2021 1 oz Silver Niue Athena Owl Stackable Coins are available to purchase either individually in various bulk options. Individual 1 oz silver coins ship in protective plastic flips. Multiples are available in one of three options: tubes of 20 coins, purple boxes of 100 coins, or Master Boxes of 500 coins. The purple box has five tubes of 20, while the Master Box has 25 tubes of 20.

Silver.com customer service is available to assist you with questions at 888-989-7223. You also connect with us live online or email us directly.