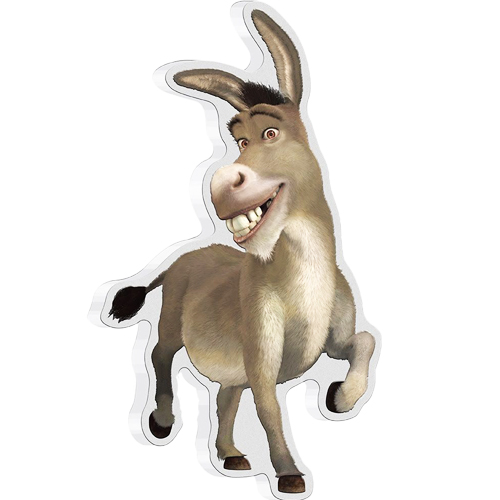 The latest release in the DreamWorks 20th-anniversary series represents one of the most lovable characters from the Shrek franchise. Throughout the major films in the franchise, Donkey was there to provide viewers with heart-warming moments and well-timed laughs. Now, 2021 1 oz Silver Niue DreamWorks Donkey Shaped Coins are available to you for purchase online at Silver.com.

Shrek was one of the first blockbuster hits from DreamWorks Animation. The film was released in 2001 and brought a new generation of animated films to the big screen. Not only was the technology by the animation groundbreaking at the time, but the script for the animated film can also be considered groundbreaking.

Prior to the release of films like those in the Shrek franchise, animated films were seen as being exclusively aimed at children. The content itself and the storylines were simple and appealed to the mindset of younger audiences. Given that parents often sit through animated films with their children, the inclusion of subtle, adult humor that could make parents laugh without being inappropriate for children made Shrek a big hit.

The obverse of 2021 1 oz Silver Niue DreamWorks Donkey Shaped Coins comes with an effigy of Queen Elizabeth II. In this fourth-generation design from the Royal Mint of England, the Queen is set in right-profile relief and shown wearing the Girls of Great Britain and Ireland Tiara. The design was created in 1998 by Ian Rank-Broadley and has featured widely on the coins of Britain, Australia, New Zealand, and several other Commonwealth nations throughout the South Pacific.

On the reverse side of 2021 Silver DreamWorks Donkey Shaped Coins is an image of the affable Donkey character from the film. The depiction of Donkey on this side of the coins includes a layer of colorized lacquer that brings his figure to life as seen in the films. He is shown in a trotting stance with a smile on his face.

These 2021 1 oz Silver Niue DreamWorks Donkey Shaped Coins are available to you for purchase with individual packaging from the mint. Each Donkey Shaped Coin comes with its own presentation display featuring Shrek-themed graphics. The coins also come with a Certificate of Authenticity and proof visuals, meaning the coins have frosted designs and mirrored fields.

Silver.com customer service is available at 888-989-7223 to answer any questions about silver for sale. We are also available to you online using our live chat and email address features.