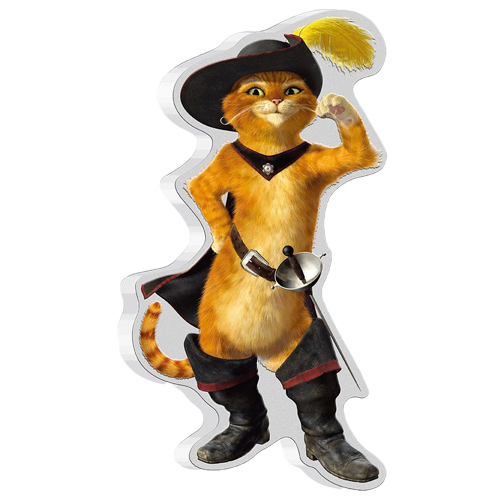 DreamWorks Animation is one of the leading studios for the production of animated feature films. Though it was created many over the years, the Shrek franchise stands out as one of the most successful. The third release in the series represents the shape and image of Puss in Boots. Right now, 2021 1 oz Silver Niue DreamWorks Puss in Boots Shaped Coins are available to purchase online at Silver.com.

Each of the 2021 1 oz Silver Niue DreamWorks Puss in Boots Shaped Coins available here comes with beautiful colorization and themed packaging. Each coin has its own, individual package with Puss in Boots artwork. The coins in this release are shaped like different characters from the Shrek franchise at DreamWorks and boast colorization on the reverse design elements.

Puss in Boots joined the Shrek universe in 2004. The character, voiced by actor Antonio Banderas, appeared in the Shrek 2 feature film released in 2004 and would go on to earn a spin-off film in 2011. The 2011 film helped round out the character of Puss in Boots by following him on his escapades on a timeline prior to him meeting Shrek in the second feature film.

The obverse side of 2021 Silver Niue DreamWorks Puss in Boots Shaped Coins comes with a depiction of Queen Elizabeth II. Britain’s longest-reigning monarch, Elizabeth II features here in a design that was initially released on Royal Mint coinage in 1998. The image was the fourth-generation effigy for British coins and remains in use on the coinage of Commonwealth Nations like Niue, Tuvalu, and Tokelau.

On the reverse field of 2021 1 oz Silver Niue Puss in Boots Shaped Coins is the character that gives the coin its shape and name. Puss in Boots, as depicted in the DreamWorks Animation films, is shown here with brilliant colorization added to his body and the attire he wears within the design element.

If you have any questions when you buy silver, please feel free to ask. Silver.com customer service is available at 888-989-7223, online using our live chat, and via our email address.