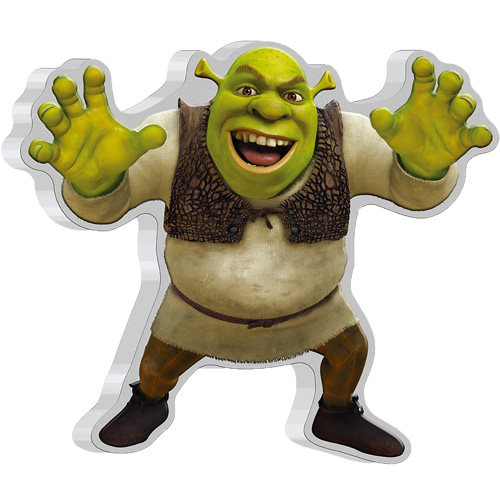 Shrek was one of the most popular animated films of the early 21st century. Released 20 years ago and debuting at the 2001 Cannes Film Festival, Shrek was a delight to children and parents alike. The animated characters and the inclusion of popular fairy tale figures made it a joy for children, while the subtle adult humor slipped into the film made it enjoyable for parents to sit through. Today, 2021 1 oz Silver Niue DreamWorks Shrek Shaped Coins are available to you online at Silver.com.

The release of Shrek in 2001 helped put DreamWorks on the map in the genre of feature film computer animation. At the time, Pixar was the leading name in this field. The success of Shrek at the box office helped make DreamWorks a major competitor against Pixar and resulted in several subsequent Shrek adaptations. This included Shrek 2 in 2004, Shrek the Third in 2007, and Shrek Forever After in 2010. The franchise also released two holiday specials and other spin-off films and stage musicals.

All of these 1 oz silver coins in the 2021 Niue DreamWorks Shrek Shaped Coins are available to you with presentation packaging. The themed boxes the coins arrive in include artwork replicating the image of Shrek. These silver coins are shaped blanks that take on the form of Shrek, the namesake ogre from the feature film. Each one has colorized visuals on the reverse.

On the obverse of 2021 1 oz Silver DreamWorks Shrek Shaped Coins is an effigy of Queen Elizabeth II. In this right-profile design, Her Majesty is shown here wearing the Girls of Great Britain and Ireland Tiara. This design was developed for the Royal Mint in 1998 by Ian Rank-Broadley and featured on British coins from 1998 to 2015. It continues to feature on coins of the Commonwealth, including Tuvalu, Tokelau, the Cook Islands, and Niue.

The reverse side of 2021 1 oz Niue DreamWorks Shrek Shaped Coins comes with a colorized depiction of the famous ogre. Cranky and short-tempered, Shrek is lovable deep down if he can find people who appreciate and respect him. He is shown here with his hands raised and a goofy look on his face.

Please contact Silver.com if you have any inquiries. Our team is available to assist you at 888-989-7223, online through our live chat, and using our email address.