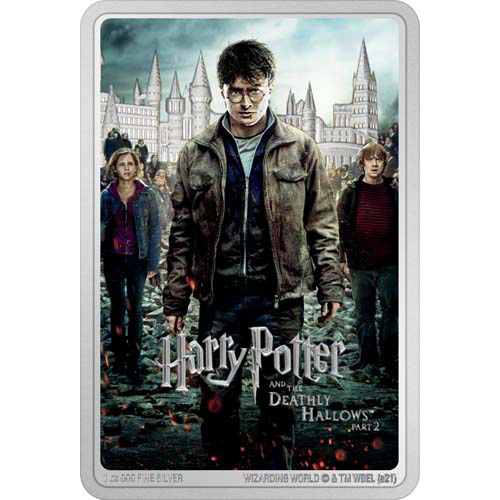 After more than a decade of fresh novels and new feature films, the Harry Potter franchise came to a conclusion with the release of the Deathly Hallows. The final novel from J.K. Rowling was published in 2007 and the final feature films based on this novel debuted in theaters in two parts released in 2010 and 2011. Now, 2021 1 oz Silver Niue Harry Potter and the Deathly Hallows Part 2 Movie Poster Coins are available to you for purchase online from Silver.com.

J.K. Rowling’s final installment in the Harry Potter franchise was published in 2007 with the book Harry Potter and the Deathly Hallows. When Warner Bros adapted this novel for the feature film franchise, the climactic conclusion was split into two films released in November 2010 and July 2011.

The conclusion to the epic adventure of Harry Potter and his battle against Lord Voldemort was met with tremendous success. More than 10 million copies of the novel were sold in the first 24 hours in the United States and the United Kingdom alone, a Guinness record for book sales. The Part 1 film grossed $977 million worldwide, while Part 2 grossed $1.3 billion.

On the reverse side of 2021 1 oz Silver Harry Potter and the Deathly Hallows Part 2 Movie Poster Coins is a depiction of the theatrical poster from the release of the final film in the Harry Potter franchise.

These 2021 1 oz Silver Niue Harry Potter and the Deathly Hallows Part 2 Movie Poster Coins are available as rectangular bullion coins with colorized reverse designs and proof visuals. The coins are held in display blocks with a clear, snap-on lid that is magnetized and easily removed for close-up viewing of the coins. The coin and display ship in a themed box with a Certificate of Authenticity included that features a unique serial number.