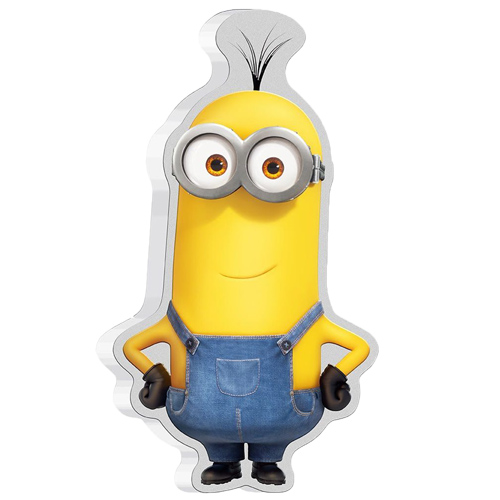 The Minions are some of the standout characters from the Despicable Me franchise. Though countless Minions featured in the first film from the series, it wasn’t until the second Despicable Me title that the Minions you know and love today took on the same name, appearance, and character traits in each movie. Now, 2021 1 oz Silver Niue Minion Series Kevin Shaped Coins are available to you for purchase online at Silver.com.

One of the unique facets of the Minions in the Despicable Me franchise is the change of appearance for several of the main characters after the first film. In the first Despicable Me film, Kevin is actually a one-eyed Minion with a short buzz cut. In all of the subsequent films, and as depicted in these Kevin Shaped Coins, he is a taller, two-eyed Minion with sprout-cut hair.

Describing any one Minion as being playful and silly is a disservice to the unique personality of each Minion. Yes, like any of the other Minions, Kevin is a playful soul who loves to goof around. However, he has his own personality as well. In particular, he enjoyed making fun of and teasing his fellow Minions.

The obverse of 2021 1 oz Silver Niue Minion Series Kevin Shaped Coins comes with a depiction of Queen Elizabeth II. Her Majesty is shown here in right-profile relief in 1998 design from Ian Rank-Broadley. This effigy shows the Queen wearing the Girls of Great Britain and Ireland Tiara on her head.

On the reverse side of 2021 Silver Niue Minion Series Kevin Shaped Coins is an image of Kevin the Minion. He is shown here with the appearance of your typical Minion, boasting yellow skin and wearing blue-jean overalls. He is depicted with a smile on his face as he stares right at you with his hands resting on his hips.

These 2021 1 oz Silver Niue Minion Series Kevin Shaped Coins are available to you with themed presentation boxes. The boxes feature artwork depicting Kevin with a viewing window that shows off the coin inside. Each coin has proof visuals that include frosted designs with mirrored visual fields.

Silver.com customer service is available to assist you with questions about silver for sale at 888-989-7223. We are also available to you online through our live chat and email address features.