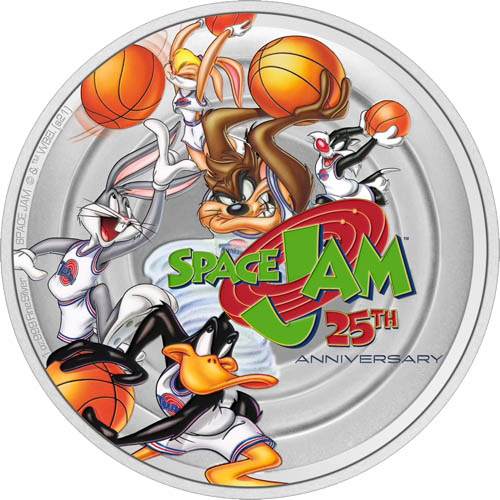 21st century moviegoers are likely only aware of the Space Jam universe with Lebron James as the star who comes along to help the animated characters from Warner Bros. in their quest to win an intergalactic basketball game. However, 25 years earlier, Michael Jordan helped these characters win their freedom in a game against alien invaders. Now, 2021 1 oz Silver Niue Space Jam 25th Anniversary Coins are available to you for purchase online at Silver.com.

In 1996, the first Space Jam feature film was released and was the first Warner Bros. Feature Animation film ever produced. The film starred Michael Jordan as a fictionalized version of himself, with other notable actors and voice actors include Wayne Knight, Billy West, and Danny DeVito.

The film follows a fictionalized timeline that is meant to reflect Jordan’s brief retirement from the NBA. The film is set between 1993 when Jordan initially retired and 1995 when he returned to the Chicago Bulls. During this period, he is recruited by the characters of Looney Tunes to help them win a basketball game against a race of visiting aliens who will enslave them in an amusement park if they lose.

The obverse of 2021 Silver Niue Space Jam 25th Anniversary Coins comes with a depiction of Queen Elizabeth II. This right-profile portrait was created in 1998 by Ian Rank-Broadley and represents the fourth-generation effigy of the Queen used on British coins. In this design, she is shown wearing the Girls of Great Britain and Ireland Tiara. For this release, she is set against a background field with a basketball texture.

On the reverse side of the 2021 1 oz Silver Space Jam 25th Anniversary Coin is a depiction of the starting five for the Looney Tunes team. The colorized images show Bugs Bunny, Lola Bunny, Daffy Duck, Sylvester, and the Tasmanian Devil.

These 2021 1 oz Silver Niue Space Jam 25th Anniversary Coins are available to you for purchase with clear displays housed in a Space Jam 25th anniversary-themed shipping box. The Certificate of Authenticity is printed on the box along with the individual serial number.