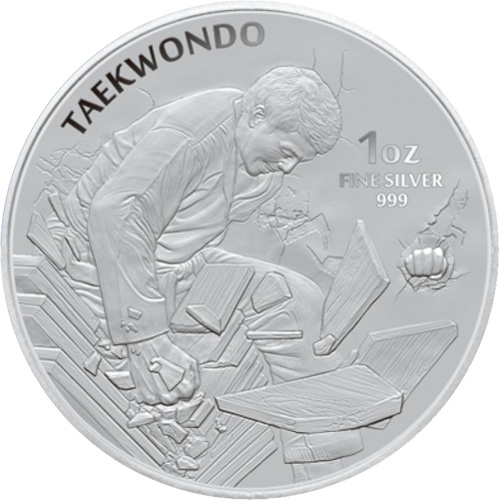 There are many different Martial Arts practiced in the world today. Karate, Kung Fu, and Judo commonly rank among the most significant. But in South Korea, Taekwondo is easily considered the most popular. In fact, it was the first Korean Martial Art to appear in Olympics games when it debuted in Seoul in 1988. But its influence is not just limited to South Korea. Today, more than 70 million people practice this art around the world. Now, 2021 1 oz Silver South Korean Taekwondo Medals are available to you online at Silver.com.

Taekwondo is an elaborate fighting sport that involves a variety of kicks, punches, and joint-locks. While this Martial Art didn’t become popular in Western culture until the 1960s, it is believed by historians to have existed in Asia for at least 2000 years. The modern version of Taekwondo we know today originated in the 1940s thanks to Korean General Choi Hong Hi. While there are Taekwondo masters who compete in the Olympics today, this Martial Art is also practiced on a more general level by students who learn basic moves and tenets of the form to improve their daily life.

The Taegeuk is featured on the obverse of 2021 1 oz South Korean Taekwondo Medals. This is a red and blue Yin-Yang symbol that is found on the South Korean flag. The word also refers to a set of offense and defense moves in Taekwondo. On the symbol is a latent security device that reveals the medal’s purity when shifted left or right. The words 2021 Korea are inscribed on the obverse as well.

A Taekwondo Martial Artist is showcased on the reverse side of 2021 Silver South Korean Taekwondo Medals. This fighter appears in a crouching position as he smashes his fist through a pile of boards. In the background we also see a fist breaking through a wall. Across the rim are the words Taekwondo, 1 oz Fine Silver .999.

All 2021 1 oz Silver Taekwondo Medals are delivered in protective packaging. Individual medals ship in plastic flips, while multiples of 25 come in tubes, and multiples of 250 in boxes. The boxes consist of ten tubes of 25 medals each.

Please feel free to reach out to Silver.com with any questions you may have when buying silver. We are available on the phone at 888-989-7223, online using our live chat, and via our email address.