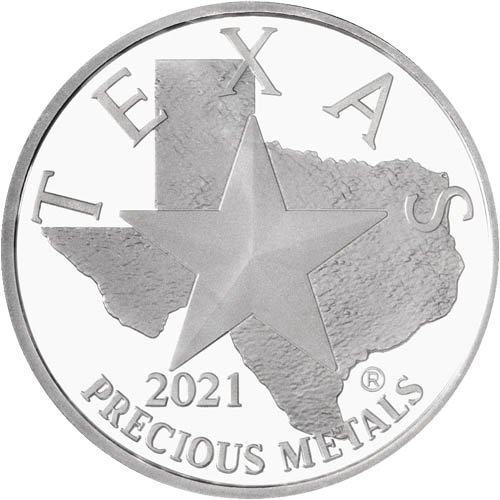 The Silver Texas Mint Round Series is one of the most sought-after silver round collections available today. The 1 oz silver rounds in the series feature the same obverse design each year, but since its 2013 debut, the reverse face of the rounds in the collection have offered new designs almost every year. The 2020 release marked the start of a four-round design series known as the Revolution Series with designs honoring the Texas Revolution. Right now, 2021 1 oz Silver Texas Mint Rounds are available to purchase online at Silver.com.

The new Revolution Series in the Silver Texas Mint Series offers new reverse designs capturing four moments from the Texas Revolution. The first release in 2020 showcased the opening shots of the war with the Battle of Gonzales. In the 2021 release, a pivotal moment of the war comes to the forefront with the design inspired by the Battle of the Alamo.

The obverse of 2021 Silver Texas Mint Rounds features the Great State of Texas. Here, the outline of the state dominates the background field with a massive Lone Star of Texas superimposed over the state in the immediate foreground.