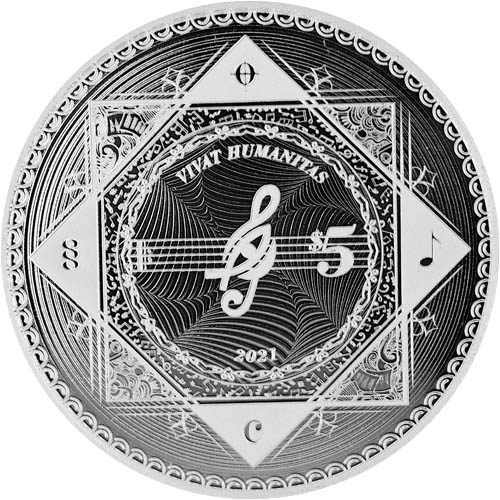 As early as 2015, the Pressburg Mint began issuing silver bullion on behalf of the island nation of Tokelau. The first of those was the Chronos Series with its new depictions of clocks and time. The Chronos Series was available from 2015 to 2018 as a silver round collection before transitioning to a legal tender silver coin in 2019. The Terra Series and this Vivat Humanitas Series also started as silver round collections before switching over to silver coins.

In addition to these popular collections, the Pressburg Mint also introduced two other collections that have only been available as silver bullion coins. The Equilibrium Series was the first with its 2018 debut and was followed by the Icon Series in 2020. As for the Vivat Humanitas Series, the designs focus on elements of humanity. The term Vivat Humanitas translates to English as “long live humanity.”

The obverse side of 2021 1 oz Silver Tokelau Vivat Humanitas Coins bears a portrait of Queen Elizabeth II. Her Majesty has reigned as Queen of England since 1952 and is the longest-reigning monarch in English history. The right-profile portrait of the Queen shown here is the fourth-generation design that was created in 1998 by Ian Rank-Broadley.

On the reverse field of 2021 Silver Tokelau Vivat Humanitas Coins is a design honoring musical advancement in human society. The primary design is that of the treble clef, one of four clefs used with the greatest frequency in musical composition. Generally speaking, a clef is used to indicate which notes are presented on the lines and spaces of a musical stave.

These 2021 1 oz Silver Tokelau Vivat Humanitas Coins are available to you with proof-like visuals that include frosted and mirrored elements. The contrasting elements help the designs stand out from the fields of the coins. Each one is housed in an individual plastic capsule and comes from a limited release of only 7,500 coins.

Silver.com customer service is here to assist you at 888-989-7223. Alternatively, you can contact us online through our live chat and email address features.