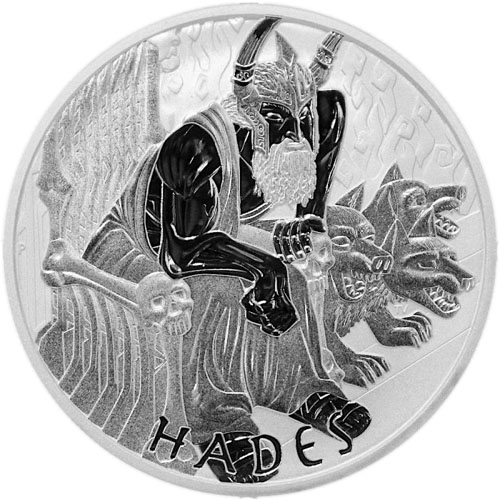 In 2014, the Perth Mint introduced a series of silver bullion coins known as the Gods of Olympus. The limited-issue series was so popular with collectors that an investment-grade version of the series was introduced in 2020. Featuring in the series are the same three gods that debuted back in 2014. Now, 2021 1 oz Silver Tuvalu Gods of Olympus Hades Coins are available to you for purchase online at Silver.com.

In 2020, the images from the 2014 Series were revived on a new investment-grade collection with higher mintage figures. The BU coins feature Zeus, Poseidon, and Hades, in order, just as the original collection did.

The obverse side of 2021 Silver Tuvalu Gods of Olympus Hades Coins features an image of Queen Elizabeth II. This effigy of the Queen was created in 1998 by Ian Rank-Broadley and used on the coins of Britain from 1998 to 2015. The design shows the Queen in right-profile relief with the Girls of Great Britain and Ireland Tiara.

On the reverse field of 2021 1 oz Silver Gods of Olympus Hades Coins is a depiction of the god of the underworld. Hades is the brother of Zeus and Poseidon, the rulers of Mount Olympus and the seas, respectively. Hades was the least liked among the brothers, and when they overthrew their father and the Titans as rulers of the world, Hades was cast into the underworld to rule over the darkness.

These 2021 1 oz Silver Tuvalu Gods of Olympus Hades Coins are available to purchase in Brilliant Uncirculated condition. Each coin comes with an individual protective capsule for shipping.

Silver.com customer service is available to assist you at 888-989-7223. We are also available online using our live chat and email address.