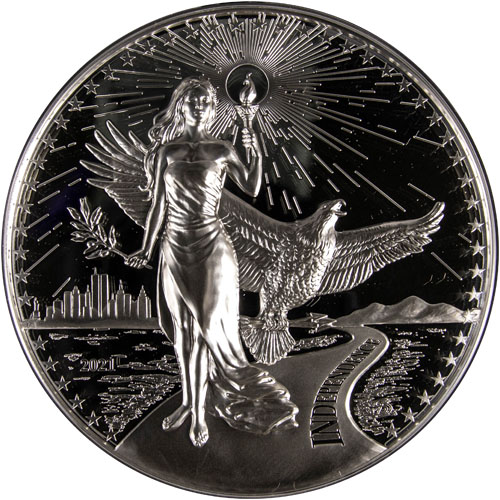 In the late-18th century, the colonies of British North America set about on a course toward independence from Great Britain. These colonies would go on to form the United States of America and founded the nation on the principles of independence, freedom, and liberty. These core American Virtues are the focus of a new series of silver rounds. Now, 2021 10 oz Proof Silver American Virtues Independence Silver Rounds are available to you for purchase online at Silver.com.

Historians largely view the history of modern global states as forming through the course of four major waves of independence movements. While the earliest surviving document known as a declaration of independence is Scotland’s Declaration of Arbroath in 1320, it is the American Revolution that is widely regarded as the first modern movement to succeed and was also the start of the first wave.

Following the American Revolution in the 1770s, the late-18th century and the majority of the 19th century saw the first wave of independence movements. Oddly enough, America’s victory in the Spanish-American War brought about the end of the first wave as the Spanish Empire’s last remaining colonies achieved independence. The other major waves came following the First World War and its breakup of long-standing European empires, the end of World War II and the defeat of the German Reich and Empire of Japan, and finally, the collapse of the Soviet Union in the early 1990s.

The obverse side of the 2021 10 oz Proof Silver American Virtues Independence Silver Round features a depiction of Lady Liberty. With a torch in one hand and an olive branch of peace in the other, Liberty walks the road of independence as an American bald eagle flies by her side clutching the arrows of war. The New York City skyline is prominent in the background field.

On the reverse field of 10 oz Proof Silver Independence Rounds is a portrait of President Thomas Jefferson. An American Founding Father and author of the Declaration of Independence, President Jefferson served two terms as the 3rd President of the United States of America at the turn of the 19th century.