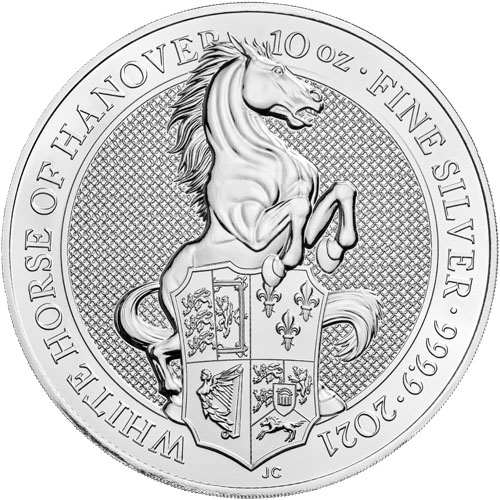 These 10 oz Silver British Queen’s Beast White Horse Coins are the largest and heaviest you will find in the Brilliant Uncirculated version of the Queen’s Beast Coins. The coins in the BU Series consist of 2 oz silver, 1 oz gold, 1/4 oz gold, 1 oz platinum, and these 10 oz silver coins. When the series launched in 2016, the initial design was available in the 2 oz silver, 1 oz and 1/4 oz gold options only. In 2017, the 10 oz silver and 1 oz platinum coins were released with the original design once again leading off the collection.

All of the 2021 10 oz Silver British Queen’s Beast White Horse Coins available here come individually or in multiples. Single coins will ship to you inside of acrylic capsules, while multiples of 15 will ship inside of boxes. Each coin is available in Brilliant Uncirculated condition.

Queen Elizabeth II is depicted on the obverse of 2021 10 oz Silver British Queen’s Beast White Horse Coins. This effigy of the Queen is the fifth-generation portrait used on British currency during her reign. It was created for the Royal Mint of England in 2015 by Jody Clark, who at 33 years old became the youngest Royal Mint artist to complete a monarch portrait. The design shows the Queen in right-profile relief with the George IV State Diadem Crown.

In the reverse design of 2021 Silver British Queen’s Beast White Horse Coins, the Royal Mint features a stirring depiction of the White Horse of Hanover. From the coat of arms of the House of Hanover, the White Horse came to the Royal Arms of England in 1714 when Elector George of Hanover ascended the throne of England as King George I. The first of the Hanoverian monarchs, Elector George’s claim to the throne came through his grandmother, Elizabeth Stuart. Elizabeth Stuart was the sister of King Charles I.

Please contact Silver.com with any questions about this silver for sale. You can call us at 888-989-7223, chat with us live online, or email us directly.