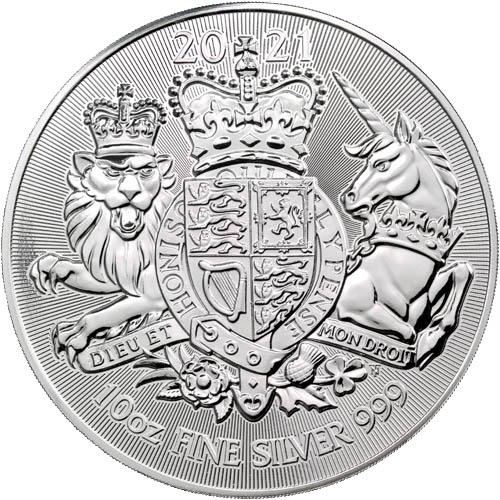 Introduced in 2019, the British Royal Arms Series at the Royal Mint of England offers a stunning reverse design capturing the modern version of the coat of arms of the monarchy. The series expanded after just one year in production to include an additional coin among both the gold and silver coins for sale, with the added silver coin coming in a 10 oz silver weight. Right now, 2021 10 oz Silver British Royal Arms Coins are available to purchase online at Silver.com.

Each 2021 10 oz Silver British Royal Arms Coin is available to purchase with a protective plastic capsule. The coins are all in Brilliant Uncirculated condition. The 10 oz silver coin is in its second release in 2020, having been introduced one year after the 2019 debut of the series. A 1/4 oz gold coin was introduced the same year as these 10 oz silver coins.

The current form of the Royal Arms of England, the coat of arms of the monarchy, was adopted in 1837. Following the death of King William IV, the Hanoverian hold over the throne ended with the rise of Queen Victoria to the throne. As such, the Hanoverian arms was removed from the shield in the Royal Arms and it was rearranged to take on its now-familiar shape of a quartered shield. Each quadrant represents a member state of the United Kingdom. In the modern era, this includes England, Northern Ireland, and Scotland. Wales, though a part of the United Kingdom, does not have the same status.

The obverse side of 2021 10 oz Silver Royal Arms Coins features a bust of Queen Elizabeth II. Her Majesty is depicted in right-profile relief and wears the George IV State Diadem Crown, a piece from the official Crown Jewels. The design element includes a guilloche background design element behind the portrait of the Queen.

On the reverse field of 2021 Silver British Royal Arms Coins is an image of modern Royal Arms. Designed by Timothy Noad, the image includes a quartered shield that is crowned by the Imperial State Crown. The shield features the individual national coat of arms from England, Scotland, and Northern Ireland. The shield is supported by the two most important heraldic beasts in England, the Lion of England and the Unicorn of Scotland.

If you have any questions, please don’t hesitate to ask. Our customer service team is available at 888-989-7223, online using our live chat, and via our email address.