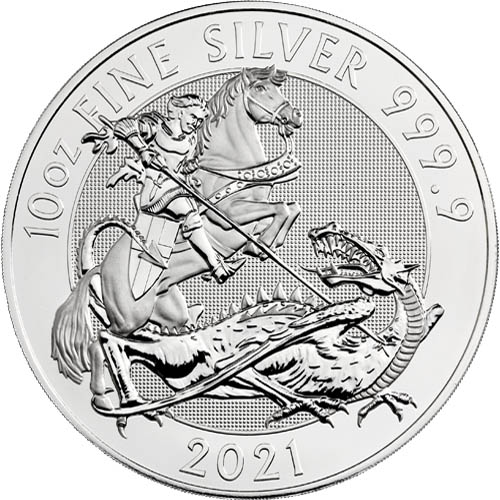 Those investors buying silver in the British Valiant Series from the Royal Mint of England have a choice between 1 oz silver and 10 oz silver. The collection debuted in 2019 with a modern, distinctive design of St. George slaying the dragon. Images of St. George in this legendary tale have been on British coins since at least 1817 with the debut of the modern iteration of the Gold British Sovereign. Today, 2021 10 oz Silver British Valiants are available to you online at Silver.com.

While the Silver British Valiant Series delivers a modern depiction of St. George on horseback slaying a dragon, this is not the first appearance of his figure on horseback as he tames and slays the beast. In 1817, when the kingdom reintroduced the British Sovereign coinage, Benedetto Pistrucci delivered a depiction of St. George slaying the dragon on its reverse. Since 1817, that image has featured on the Gold British Sovereign throughout most of the currency’s issue over the past 200 years.

All of the 2021 10 oz Silver British Valiant Coins available at Silver.com are in Brilliant Uncirculated condition. The Royal Mint offers the coins for purchase inside of protective plastic capsules or boxes of 15 silver coins.

On the obverse side of 2021 Silver British Valiants is an image of Queen Elizabeth II. The Queen’s effigy is routinely updated by the Royal Mint during her reign to reflect her age as she sits on the throne of England. The record-setting monarch appears here in the fifth-generation effigy of Elizabeth II as designed in July 2015 by Jody Clark. The portrait of the Queen is a right-profile relief with Her Majesty shown wearing the George IV State Diadem Crown on her head.

The reverse field of 2021 10 oz Silver British Valiants includes a new depiction of St. George slaying the dragon. Written tales of St. George slaying a dragon began to emerge in the 12th century, with the legend first appearing in England during the late-12th and early 13th-centuries following the return of British soldiers from Crusades in the Middle East. He is shown here riding into battle on a powerful steed as he runs down the dragon and slays it with a long spear.

Please contact Silver.com if you have any questions about these silver coins. You can reach us on the phone at 888-989-7223, connect with us on the web through our live chat, or email us directly.