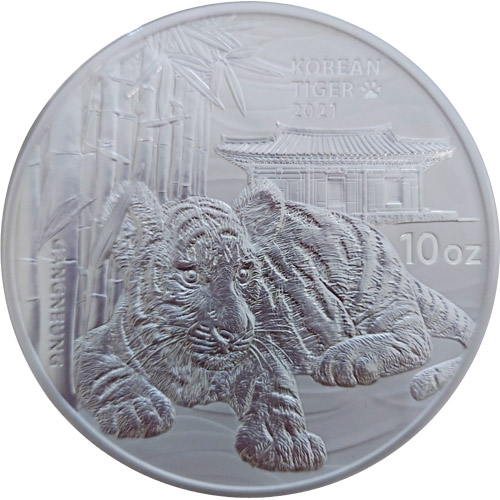 Now in its 6th overall year of release, the Korean Tiger series remains one of the most popular collections from KOMSCO. The series began in 2016 but was limited to the gold edition. As the series grew in popularity, the silver version was added in 2018. Today, collectors have a wide range of purchasing options when it comes to the Korean Tiger. Not only is it produced in both gold and silver, but it also features proof, antique, and BU versions. Today, 2021 10 oz Silver South Korean Tiger Medals are available to you online at Silver.com.

Tigers have roamed planet earth for over a million years, and yet today are considered endangered. Estimates claim there are only about 4000 of these mighty creatures left in the world. Originally there were nine subspecies of tiger, but three of them are now extinct. Many suspect the South-China tiger has also gone extinct since no sightings have been reported in the last ten years. This means that the remaining tiger subspecies are the Bengal, Indochinese, Sumatran, Siberian, and Malayan. Of these, the Siberian is the largest. While they no longer reside in the Korean peninsula, they once did, which is why in that region they are known as the Korean tiger.

These 2021 10 oz South Korean Tiger Medals have a limited mintage of just 200 medals, so don’t wait too long to place your order. Each medal has been crafted in .999 fine silver and is delivered to you in Brilliant Uncirculated condition. This means you will detect few, if any, flaws upon inspection.

The obverse of 2021 Silver South Korean Tiger Medals depicts a tiger cub resting against a wall of bamboo. Behind the cub there is a Korean temple, with inscriptions above it reading Korean Tiger, 2021. Additional inscriptions include Gangneung, which is a city in South Korea, and 1 oz.

On the reverse side of 2021 10 oz Silver South Korean Tiger Medals you will see Hangul script in the shape of the Korean peninsula. There is also a textured background and a tiger pattern along the rim. Additional details include the Taegeuk and a laten security device that switches images as you tilt it in the light. Inscribed on the edges are the words Republic of Korea, Fine Silver, .999.

Please don’t hesitate to contact Silver.com with your questions when buying silver. You can call us at 888-989-7223, chat with us live online, or simply send us an email.