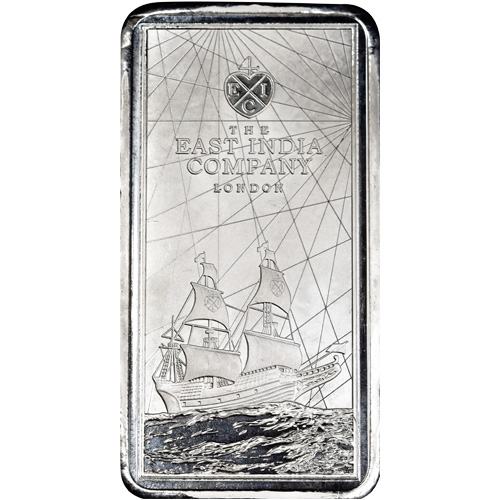 The island of St. Helena is a massive volcanic rock that formed over millions of years in the Atlantic Ocean tropics off the west coast of Africa. A British Overseas Territory, most know the island of St. Helena as the place where Napoleon Bonaparte died in exile following his decade-long campaign to expand the French Empire’s boarders in Europe. St. Helena came under British influence through the East India Company more than a century prior to Napoleon’s exile. Now, 2021 10 oz Silver St. Helena Rectangular East India Company Coins are available to you for purchase online at Silver.com.

St. Helena was first seen by European explorers when Joao da Nova, sailing in service of Portugal, passed the island and named it for Saint Helena of Constantinople. Many early explorers, including Garcia de Noronha of Portugal and Sir Francis Drake of England, found the island to be uninhabitable, and as such, no colonies were established.

The fortunes of the island would change in the future with the arrival of East India Company ships. The company was granted a charter to govern St. Helena as a stop-over island for its ships by Oliver Cromwell in 1657. The company would go on to control the island as a base for its ship transiting from the British Isles to the East Indies, and back, for the next century-plus.

The obverse side of 2021 10 oz Silver St. Helena Rectangular East India Company Coins features a bust of Queen Elizabeth II. This right-profile portrait is based on Raphael Maklouf’s depiction of the Queen from 1985. It featured originally on Royal Mint coins from 1984 to 1997 and stands as the third-generation effigy of the Queen during her right. In this regal depiction, the Queen wears the George IV State Diadem Crown.

These 2021 10 oz Silver St. Helena Rectangular East India Company Coins are available to purchase with individual plastic sleeves or bulk packaging options. You will receive multiples of 10 in a box or multiples of 50 in a Master Box. All items are in Brilliant Uncirculated condition.

Silver.com customer service is ready to assist you at 888-989-7223 when you buy silver. Additionally, you can contact us online through our live chat and email address features.